Ellie Goulding - High For This 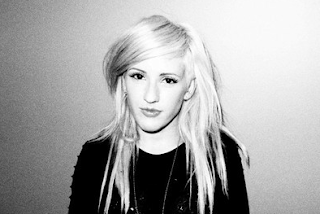 Around the end of 2008 and start of 2009 a whole gang of new UK based female singers crashed into the world of pop, like an agreeable hurricane. With colour, glamour, style and fashion they blasted away the landfill indie of the Frattellilightrazordetectives like dead leaves on the ground with music that was commercial enough to find a place on the radio and in the charts but had just enough edge and pizazz to attract the sort who normally thought that pop music was just for children. The likes of Florence & The Machine, Little Boots, La Roux, Marina & The Diamonds and Ellie Goulding all became Breaking More Waves regulars and are now returning (or have recently returned) with second albums.

Ellie Goulding lost quite a lot of love from both blogs and the ‘serious’ music press around the time of her album. It seemed that Lights wasn’t quite what most journo types wanted or expected. Alex Petridis of The Guardian in his two stars out of five review called the record ‘quite normal’, but it didn’t stop Lights selling a huge amount of copies.  For the record we placed it at number 10 in our top ten albums of the year – we liked it a lot. In just over 12 months we watched Ellie Goulding go from playing to 50 people in an empty basement club in Brighton to a sold out show of 1800 people in the same city.

Now after a period of silence Ellie returns, with a cover of High For This by The Weeknd. It’s a clever choice of song, repositioning her back as the cool pop girl that it’s ok for the journalists and bloggers to like, rather than the sold-out blandness Elton John Lewis Christmas advert lady.

What the future holds for Ellie’s own material remains to be seen, but this chilled jam (which picked up 70,000 plays in the first 24 hours on Soundcloud) is arrestingly seductive in all the right ways. Welcome back Miss Goulding, Hereford’s finest!

Ellie Goulding - High For This

this is lovely. never thought I'd say Ellie Goulding's voice was seductive, sometimes she sounds like/the effects used on her voice make her sound like a six year old.