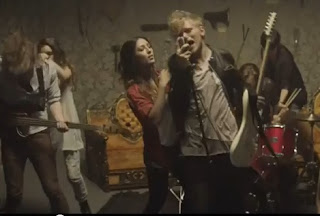 When we introduced unsigned Swedish band The Concept in January the number of web page views and plays we received for the songs Gimme Twice and D-D-Dance suggested that the group were onto a winner. So it comes as no surprise to find that they have now been snapped up by a major label and are unleashing their effervescent brand of Phoenix / Strokes / Alphabeat /cross pollinating pop via a self titled EP. The sound might be the same with both the original frenetic tracks present and correct, readying themselves for a second go at making you jerk your body like an electrified headless chicken, but the name has changed; The Concept are now The Royal Concept.

From the EP we’re streaming a brand spanking new track. Maintaining the bands pop songwriting sensibilities Knocked Up sees the group start at a more moderate pace than the two previous numbers,then at about two minutes and fifteen seconds it kicks off its boots and races for the finishing line like a lost member of the Strokes at their best.

There’s also a new video for Gimme Twice (below) which has already picked up nearly 100,000 views in half a week. The song is a gloriously sunny side up piece of pop music and the film matches the tune’s energy with good-looking head-shaking Swedish band members, pillow fights and a set that is literally trashed to destruction by the end.

If you missed The Royal Concept first time round, shame on you. Here’s your second chance time to get acquainted.

The Royal Concept - Knocked Up

Email ThisBlogThis!Share to TwitterShare to FacebookShare to Pinterest
Labels: The Concept, The Royal Concept