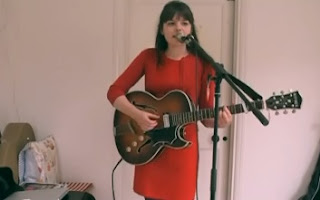 Over the last year and a half we’ve become a little bit obsessed with Alice Jemima at Breaking More Waves. If we were to hone down exactly why this is we’d suggest there are three key reasons; the warm tender simplicity of her songs, the whispered feminine beauty of her voice and as a performer an easy charm that she seems to be almost unaware of.
Last week Alice was in London to perform a couple of shows, one being her second visit to the Old Queens Head in Islington where she played alongside the likes of Foe and Abi Wade and secondly an intimate gig at Blacks in Soho, where a number of songs were captured on film. It might not quite be as good as being there in the flesh, but the hushed audience and Alice’s sweetly captivating vocal chords tell the story well enough, wherever you are in the word. We’re featuring her song Take Me Back below.
This week Alice follows in the footsteps of Kate Nash and has uploaded a live performance of a new song called I Didn’t Know What To Expect which was written in 20 minutes flat and recorded 5 minutes later before she forgot it. It’s as fresh and honest as you can get showing how fast the internet can operate. Here’s a singer from a little town in Devon broadcasting something rather special to the rest of the world within minutes of its creation. Unlike Nash’s song it's simply adorable. Continuing her creativity Alice will be posting a new recording every day this week, check out her Facebook or Twitter for updates on how she gets on.
Alice Jemima - Take Me Back (Live)

Alice Jemima - I Didn't Know What To Expect (Live)