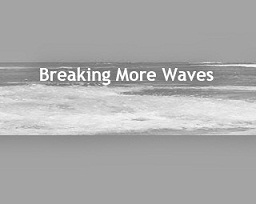 1. In certain respects the new music blog world is divided into two categories, with most blogs falling into one type or the other type or somewhere in between.

First the buzz blog. Their sole reason for existence is to deliver the music they love to your internet device first. They’re usually defined by very little editorial content as they're too busy trying to be the first to copy and paste the code into their blog and press publish. A lot of these blogs ultimately end up featuring the same artists and songs because it’s difficult to create a buzz if you stand alone.

Then there’s another sort of blog. We’re not sure what they’re called, but they’re less concerned with what’s buzzworthy and (to a greater or lesser extent) more concerned with having some sort of voice, editorial content and personality.

2. The modus operandi for a new music blogger is as much determined by the author(s) personal circumstances as anything else.

The buzz blogger for example needs lots of small amounts of spare time. He or she has to be at the laptop or computer several times a day, keeping a careful eye on everything new coming out, so that he or she can post it as quickly as possible. Constructing a buzz blog is pretty impossible if you have a full time job and a family where if you're lucky you get to start writing a blog at midnight and have to get up at 6am for work.

3. Drunk blogging can give 'interesting' results.


Writing a blog post at 3 in the morning after a 12 hour day at work, looking after the kids and then a gig and quite a few drinks with friends is very rarely a good idea, although occasionally funny. Here’s an example of when that happens. (Thankfully we edited it before posting the next day - the original was twice as rambling and also mentioned Kate Nash in sexy underwear and something about DJ hamsters)

4. It’s not all about genuine self-discovering of new music.

Many(but not all) blogs are led by the PR machine or the record industry itself. Don’t kid yourself that all blogs are just finding all this great new music like a golden needle in a haystack. Someone is often feeding them.

Bloggers by and large are actually very nice people in real life and aren’t as geeky as you would think. They do however normally have an iPhone and if you spend more than an hour with them probably won’t be able to resist checking it for their latest email and twitter updates.

6. There is no money to be made in new music blogging.

Breaking More Waves is fully independent and unfunded and intends to remain so, but even those that aren’t rarely generate more than pocket money from their site and we don’t see this changing in the future to any great extent.


We’re constantly amazed that when we meet a new up and coming artist in person after writing about them on the blog they are (normally) as excited to meet us as we are them. This tends to lead to a lot of mutual loving. This is a good thing. The world needs more love, not war. In our experience love back from artists towards blogs tends to lead towards repeat posts. New artists there's your tip - if you learn that someone has written something nice about you say thank you. It's not that hard.

8. Like anything in life there’s sometimes some politics in new music blogging.

The best advice we can give to anyone getting involved in this is put your ego to one side and remember why you’re writing the blog in the first place. Otherwise it’s just silly. For example if you write a blog and refuse to post on a band unless you're given an exclusive track, check your ego.

9. Many new artists don’t have a clue about how to promote themselves on line.

We could probably write a book about this, but here’s some simple tips about how to get your music on music blogs.

10. Our favourite blogs are very rarely the biggest.

Breaking More Waves favourite music blogs are the ones that stick to their own vision, are consistent in their tastes and opinions, write for themselves rather than anyone else, know their subject, aren’t concerned with hits or being big, have their own voice, don’t take themselves too seriously and post regularly.

11. We haven’t really learnt anything, but have learnt a lot about 'hype' and 'buzz'.

The speed at which new music blogging (and therefore music listening) works is sometimes (perhaps) counter productive to developing real love for music. Today's hype becomes yesterdays old news. Music for many bloggers seems to be treated more and more as 100% disposable.  We know for a fact that there are some bloggers out there who only spend a few weeks with an album and then move on to something else. Music seems to be treated more and more like a film at the cinema or a play at the theatre - listen once and then you're done with it. We're not sure if this is a good thing. On the one hand the new is nearly always more exciting than something you've had before, but don't the greatest rewards come from the depth and understanding that a long term relationship brings?

There’s so much new music out there, the internet has made it a huge melee of songs.  Acting as a filter can be tiring. We’ve seen blogs stop because of new music overload burn out. Only the most enthusiastic, organised and dedicated survive more than 3 or 4 years. We reckon any new music blog that keeps going more than 5 years (later this month this blog will be 4 years old) deserves a medal.

It’s why every now and then we need a holiday. We’re doing exactly that, including during our holiday a trip to No Direction Home Festival. In fact we’ve already been on holiday since last Monday, but because of the beauty of the ‘pre-write and schedule’ it appears that we’ve been posting regularly all this week up till now. But this is our final post for a few days, although we'll probably crop up on twitter so you can follow us there.

We’ll be returning to the fold later next week, but until then we'll leave you with a song that we've been enjoying the last few days. It's from Nathan Hewitt, James Wignall, Dean Reid and Marc Raue and they go by the name of Cheatahs.  Those of you who like the lo-fi, fuzzy slacker sounds of the likes of Yuck or The Lemonheads will probably nod appreciatively.

Over the years I've read about so many bands and other music acts here on BMW that I've lost count. An editorial like this just makes me want to show my appreciation :) Thank you for enduring the pains, struggles and time consuming efforts that are brought upon dee by blogging for.. hmm is this suppose to say me or you? (pt.10) ;)
Anywayz I'm still wondering if this entire blog was written in a sober state.. Guess maybe we'll find out one day

Another great read thanks
frankiie francis

Hahaha totally down with the "phone checking" and "Blog hug Love"

Yup PR companies and labels have worked out that generating blog buzz can help a new artist, but although we may be being "fed" on occasion there should be and in the better blogs there is,a filter usually our ear :) If we don't like it, we won't post it ...:) Unless of course its something we think has been incredibly over-hyped ( The Horrors stand out for us) and then we may have a little fun.