The Milk - Every Time We Fight (Video) 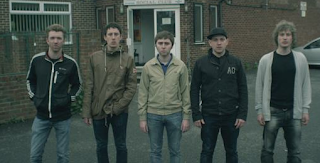 If you’ve ever felt cheated out of a brighter future The Milk’s new single Every Time We Fight, due on June 24 is the song for you. Full of the bands adrenalising soul sound, impassioned vocals and irresistible hooks it also features a video  shot in a working mens club in Dagenham by Inbetweeners star (and long-time fan of The Milk) James Buckley.  The film has a back story of a factory closing and how the people then come together as a community. Buckley himself plays the worker who rallies them together. Written at the time of the London riots, the song captures the spirit of that, but can also be seen as a more personal reflection on a relationship.
The Milk have already completed one huge UK tour this year and are out on the road again till the end of June. They really are a superb band live; their set has more in common with a DJ set than a typical live rock band, with all the songs flowing in to one another to create one gradually building party. Our only disappointment? That to date The Milk have still not released a song we mentioned back in September 2010 called Chip The Kids. If you think Every Time We Fight is good (and it is... really good) Chip The Kids could take things to a whole new level.
The Milk - Every Time We Fight (Video)
Posted by Breaking More Waves Blog at 08:30