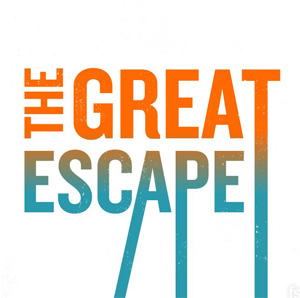 Founded in 2006 the raison d'être for Brighton’s Great Escape Festival is new music. Often billed as the UK’s answer to South by South West in Austin, Texas, the reality is that as an event it is far smaller in scale and therefore far less overwhelming. It’s possible to stroll round the bustling seaside city’s odd mix of historic and new architecture and not even notice the odd pockets of wristband sporting music enthusiasts navigating their way between the towns venues, pubs, clubs and bars catching the cream of not only British but worldwide emerging talent. Add in the ever growing Alt. Escape (effectively the main festival’s fringe event) and a burgeoning convention schedule (which this year includes Michael Eavis from Glastonbury and Rob Da Bank from Bestival / Camp Bestival talking about the state of festivals) and you have a treat for both fans of new music and those who like to discuss the wider issues of the industry.

Look back at the line-ups of previous Great Escapes and you’ll see that the likes of Florence & The Machine, Laura Marling, Mumford & Sons and even Adele have played the festival way before they became commercially successful artists. In fact we were lucky enough to watch Adele play in the Red Roaster, a small independent coffee store on St James’s St back in 2007 to an audience of less than 100 people.

However despite being much smaller and less intense than South by South West, it’s still possible for the Great Escape experience to be less than great. So in a similar fashion to last year, here are the Breaking More Waves tips for maximising your experience, followed by a few artists on the 2012 bill that we think may be worth going to see. We’re giving 3 tips for each day starting today with next Thursday (times and venues are subject to change), with Friday and Saturday following over the next two days. The event runs on the 10th-12th May.

1. The Great Escape may be a multi venue event but don’t expect to be able to wander freely from place to place. Many of the venues are small and once they are at capacity you’ll find yourself queuing until someone comes out. Even then those with delegate or press passes get priority access over ticket holders so if you have an ordinary ticket and want to see a particular band arrive at that venue early.

2. Planning is key – you can maximise your enjoyment of Great Escape by using the website gig planners or the highly functional, free and easy to use phone apps to work out your itinerary for the day. Take into account the location of venues – although most are close together you still need to allow sufficient time to travel between each one. Because of venue capacities Great Escape is not like an outdoor summer festival where you can wander freely between stages and just see whatever is on. If you attempt this you run the risk of just catching queues.

3.Sign up to the text messaging service by texting ESCAPE to 80039 and you will be sent details of schedule changes, secret shows, hidden parties, venue capacities and much more as they happen on site. There’s an initial sign up charge of £1.50 plus your standard network charge. After that you will not be charged to receive notifications from Great Escape.

4. Don’t just go to see bands you know. The beauty of any new music event is discovering a band that you haven’t heard before, so just pick something and go see. These days of course it’s possible to do your homework before the event and if you have time listen to every single band playing, but most of us don’t. However if you want some assistance why not have a look at this recently launched website which briefly categorises and rates out of 10 every band appearing - it has a slant towards favouring electronic / dance / pop acts (Porcelain Raft, Trust and Amatorski are some of its picks as ones to see). Alternatively have a look and listen to our recommendations below.

5. Use Twitter. It can be an invaluable up to the minute source of information using Great Escape hashtags and of course by following The Great Escape, The Alt. Escape and Great Escape Convention feeds, and not forgetting our own Twitter feed where we’ll be updating on what we’re seeing throughout the weekend.

6. Like any festival, pace yourself. Every year we see Great Escape casualties, necking back the drinks on day 1 only to either spend day 2 seeing nothing due to a hangover or losing their way halfway through the first day and ending up seeing no music.

7. Remember that to attend the larger shows at Brighton Dome you need to purchase an extra ticket besides your normal wristband, otherwise you’ll suffer further disappointment.

8. Can't afford a ticket ? Remember that many of the Alt. Escape shows are free for non-ticket holders or they just charge a nominal entry fee. What have your really got to lose except discovering some great new music ?

9. If you want to attend the convention part of the festival you will need a delegate pass, which you can purchase from the Great Escape website.

10. So with those tips, here are Breaking More Waves 3 musical suggestions for Thursday at the festival. Subject to timetable and venue changes (all were correct at time of publication) we’ll be at all these three shows ourselves.

Performing at an excellent Alt.Escape bill put together by Record Of The Day at Volks on Thursday afternoon that also includes the lovely Emma Louise (who we also recommend and posted about back in January), Giovanna’s debut single Out In Bold has already caught the attention of our blog buddies Faded Glamour and Flying With Anna as well as Radio 1’s Zane Lowe. It’s easy to see why; it’s a sensual and atmospheric song that raises goose bumps. We’re streaming another lesser known song below – Let Go of Yourself. Keep an ear out also for future track To Be Found which may get an airing. We’re informed that Giovanna is the sister of Winston from Mumford & Sons, so banjo watch will also be on high alert.

Giovanna - Let Go of Yourself

There are an awful lot of performers turning to ages past and reinventing or just regurgitating retro sounds but Ren Harvieu’s rich and arresting vocal sets her above many of her contemporaries. Come and see why this Salford lass was in our own Ones To Watch list for 2012 and featured on the BBC Sound of 2012 list too. The Guardian called her the missing link between Shirley Bassey and Adele. Add in a touch of Dusty Springfield and you’ll be getting close.

Ren Harvieu - Through The Night

Our final recommendation to see is another band that was on the BBC Sound of List and topped the Blog Sound of 2012 poll. Friends are another one of those achingly cool bands from Brooklyn. Fronted by one Samantha Urbani the bands highly danceable rhythmic blend of funky pop could just become your new crush and what couldn’t be more Brighton than watch them play their first of two Great Escape shows on a tacky bar on a pier that stretches out to sea?