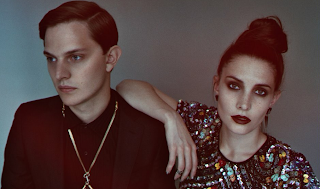 A question taken from the Grade 2 Music Bloggers exam paper 2012.

Our theory is that the biggest blogs and sites in the U.S (where there isn’t the more risky radio programming that the best UK radio output produces) probably are, but in the UK blogs have less of an impact. However despite that lesser power, the longer running more established UK blogs do still have a small amount of weight as first generation media influencers and sieves of music in their own country. Although we don’t have much evidence to justify this statement (sorry we’ll lose marks in this exam question because of it), there does seem to be a hierarchy of media when breaking new bands or artists. Blogs along with other personal social media channels are one part of that now recognised first step up - our over full email in box testifies to that.

Some of the more cynical / hip / alternative UK bloggeratti would probably cringe at the label ‘tastemaker’. Yet we’d argue that surely one of the main reasons for writing a music blog is to tell people about the music you adore and at the heart of that, what motivates bloggers to do it day in day out, for no financial reward, sometimes (certainly in our case) at antisocial times, is the desire for the blogger to want other people to love the music that he or she likes – otherwise why bother telling people about it? Effectively you’re trying to influence peoples taste and as a blogger you have to have a big enough ego to think that other people might actually like what you like.

Here’s a band that we tried to influence peoples tastes with back in October 2010. Of the 800+ blogs listed on Hype Machine at the time it was just us and our blog brother Faded Glamour that posted the demo version of the song Empire by Alpines. There certainly wasn’t any internet buzz about them. Now they have a record deal, played a support slot with Florence & The Machine at Alexandra Palace earlier this year and have had some radio play. It makes us wonder which bands or artists that aren’t the latest flavour of the month or buzz act that we’ve posted on this year might go on in 24 months to secure a deal or get played on national radio? (Yes, you see our ego is big enough to think that our taste is that perfect that other people will agree with us) If our world was absolutely perfect we'd love it if someone like the beautiful Laurel or the equally beautiful Alice Jemima had success - although the definition of success in art doesn't have to be commercial. Just the joy of creation that you're proud of is success on its own.

I see what you're saying, and drips of water can eventually erode away mountains. But Alpines have also been putting themselves out there, not least by releasing more tracks. We mustn't lose sight of the fact that it's about the talent, not the tittle tattle. Let's face it, most people don't read anything at all, and even fewer take notice of what they've read. Sad, but true. I Tweet, I write Facebook Groups and event pages ... but I know that I do it mostly for my own amusement. Anything else is bunce.