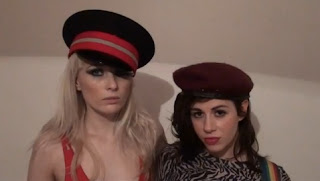 Remember Pris? They're the sassy d-i-y girl band that was sticking two fingers harshly up in front of the face of a lame pop culture world that seemed to have forgotten how to be angry.
Well, they’re back, stripped down to a two piece but still full of energy, wrath and pouty sexiness.
Having recently tweeted a picture of Fred from Spector with the word TWAT scrawled across it, new single A-Bomb In White Heat rails against Shoreditch and Hoxton hipsters like a Kenickie for 2012.  We’re pretty sure that Lauren Laverne would approve. “Oh he just died again, oh he just died again, with his garage band sleeves and his cocaine disease, oh she just died again, oh she just died again, dance away her stress in her mum’s wedding dress,” opens Cat against a barrage of whack it hard military style drumming and we’re hooked straight away. (The military style is taken further in the video, although we’re not sure if we’ve ever seen soldiers this glamorous or cool as f*ck looking.)
“Let’s kill them all do you concur?” the duo continue later; Cat is certainly a lady who doesn’t mince her words. And even although ultimately Breaking More Waves is all above peace and love, we can’t help but finding ourselves nodding along in agreement, so persuasive is the Pris blend of punkish power-pop. It’s good to have them back. We're looking forward to this war.
Pris - A-Bomb In White Heat

Yes, great to see the mighty Pris is back!!