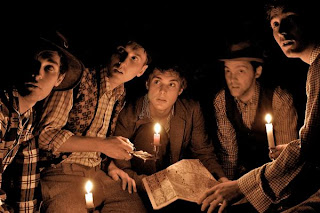 Stornoway are an impressive pastoral folk pop band from Oxford who consist of two groups of brothers and one other non related member. First forming in a snow encrusted garage in early 2006 Brian Briggs (vocals), Adam Briggs (trumpet), Rob Steadman (drums), Ollie Steadman (bass) and Jonathan Quin (keys and strings) bless the listener with unaffected, often beautiful song writing. They will be bringing their songs of nature to audiences this summer via a number of festivals including Glastonbury 2009, where they won a place via an Emerging Bands competition to play the legendary event.. They have also just played a slot on the BBC Introducing Stage at Radio One’s Big Weekend.

There are hints of early James and Belle and Sebastian in Stornoway songs such as Fuel Up, whilst on the rousing We Are The Battery Human the group feature some neat Mumford & Sons meets The Leisure Society style Americana banjo and vocals that beautifully harmonise the line “We were born to be free range.” Other songs include The End Of The Movie, a gentle acoustic guitar led piece where Brian’s soothing voice soars in a sad hearted way. Then there’s forthcoming single Zorbing, where Stornoway produce a natural, pure and cheering tune with joyous trumpet and lyrics about lying in the attic and feeling the static in between the sheets of life. Not everything the band do is folk pop though; they have also recorded a cover version of Tina Turners James Bond classic Goldeneye which is all bonkers lo-fi electro pop atari keyboard madness.

Stornoway have already gained a reputation for being slightly more educated than your average band; one of their number has a PhD and another a masters degree. Therefore it is no surprise to see that the subject matter of their songs can also take a more intellectual approach. For example The Good Fish Guide was written to help listeners remind themselves what fish it is best to eat in order to help protect our fish stocks for the future. All proceeds from the song were donated to the Marine Conservation Society. But before you label them as do good boffins, have a listen to their songs on their myspace and enjoy their musical intelligence which is plain to hear.

Stornoway will be releasing their first national single Zorbing on the 8th June and will be entertaining festival audiences throughout the summer.