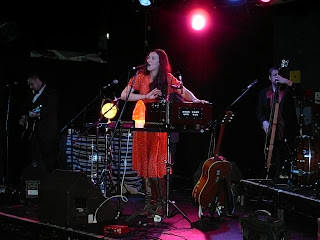 Irish singer Lisa Hannigan is probably best known in England, Scotland and Wales for her past work with Damien Rice, supplying the smooth soft feminine side of the song Nine Crimes. However in her home country her status as a solo artist has a higher profile, with a Choice Prize nomination for her debut album Sea Sew. With the album now released in the UK, it gives Lisa a chance to tour and promote the work and fully establish herself here as well.
With an audience seated at tables the atmosphere is one of relaxed hushed reverence, not something that Portsmouth Wedgewood Rooms is ordinarily used to, being more traditionally a standing only venue. With such a layout and Hannigan elevated on stage, her performance very much feels as if she is on show; this is emphasised at the end when all of the band applaud the crowd and take bows in a manner more commonly seen at the theatre.

Backed by a group of first class musicians, there is a warm and varied mix of instrumentation including trumpet, melodica, harmonium, double bass, drums, acoustic guitar, xylophone, keyboards, banjo, tambourine stick and even stylophone on display. Hannigan sings with an almost constant smile on her face and a voice that massages the ears. Often appearing completely immersed in the songs, her slightly awkward gangly frame often gives way to expressive dancing, her movements not dissimilar to Ian Curtis of Joy Division in slow motion. Her band are highly competent, every note and sound etched from their instruments with care and precision, from the soft Regina Spektorisms of the pop folk of I Don’t Know to a sultry seductive new number where Hannigan sings “I’m a high school lover, and you’re my favourite flavour.” Lille is probably the highlight of the set, a sparse understated song where Hannigans voice caresses the air with feathered beauty. There are moments where the spot on musicianship and Lisa’s effortlessly pure voice cover up the fact that the gentle professionalism of some of the songs makes them lack that special emotional resonance with the listener, but this is picking holes when Hannigan is obviously blessed with such real ability.

There is certainly much more to Lisa Hannigan than just Damien Rice’s ex backing singer. She is a talent that can easily stand alone.
Posted by Breaking More Waves Blog at 00:01