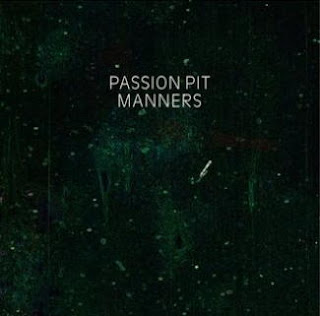 OK, let’s get this straight. Some of the songs on Manners by Passion Pit are some of the most musically joyous pop moments you will hear all year. The evidence ? Listen to opener Make Light, a humping indie disco track which rises tower block high in the chorus. Or perhaps Little Secrets with its squelchy synthesiser workout that finds its groove and drives it straight into a giddy hook with a children’s choir singing about feeling higher and higher. Then there’s Moths Wings where Passion Pit show that pop music can take big widescreen cinematic sounds and claim them as its own; hands in the air euphoria doesn’t have to belong only to rock beasts or dance heads. You’ve probably heard The Reeling, a juddering bucking animal of a pop single, that has that rare quality of sounding good on first listen but gets even better on the twentieth. You just know that the killer “Oh no, oh no,” is going to slay you every time. And even where the tunes are not so joyous such as the downbeat Swimming In The Flood the level of musical consistency remains high. If you like what you have heard so far from Passion Pit you will like this album.

Manners is an advert for technicolor studio perfection. The production is huge and imaginative, taking pop music to higher and bigger levels. It’s the kind of album that shouldn’t even be attempted to be played live. All credit to the band for not taking the brilliant Chunk of Change EP and just adding a few tracks; only a re-recorded woozy and multi faceted Sleepyhead crosses over from that release onto Manners.

Yet for all the “Na na na” hooks on Eyes As Candles and dreamy “Oo oo oo oo‘s,” on Let Your Love Grow Tall, Manners is unlikely to cross over to the mainstream. This is strictly pop music for those who like their sugar with a little sharpness amongst the smiles; call it indie if you will. It is probably just too quirky for most and is unlikely to find itself chart bound. The squealing asexual falsetto chipmunk vocal of Michael Angelakos will grate with many, and the bands lack of visual identity will give the fashion hipsters little to hang on to; but for those who enjoy the buzz of quality melodic music with plenty of keyboards, hooks and a whole raft of decent songs, rather than two or three singles and some filler, Manners will do the job very nicely indeed.
And on the subject of Passion Pit, check back here tomorrow for an amazing cover of the band (and it's not The Mummers one !)
Posted by Breaking More Waves Blog at 00:01