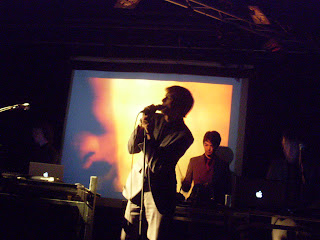 A few days ago Breaking More Waves reported on the Great Escape in Brighton where two of our highlights pulled us into the world of synthtopia where Apple Macs and keyboards rule. These highlights were Brighton based pop noir specialists Mirrors and Boston, USA funksters Yes Giantess. At the Gold Dust club at Hoxton Bar and Kitchen, a venue of huge disco balls, black painted blockwork and industrial urban trendiness, both bands collide to bring an evening of electronic ecstasy with not a guitar in site.

But before the fingers can glide across the keys we have to endure the crime against pop music that is Dolly Rockers. An X Factor riot of sequins, short skirts and sauciness, they are a hand on the hip, dancing in front of the bedroom mirror, amateur Girls Aloud. Without a live band it’s backing track karaoke. They even have the audacity to sample a section from one of the best pop songs of the eighties - Duel by Propaganda - and destroy it. We’ll give them some credit for a song called Champagne Shirley that slags off girl glamour models and their most un-Girls Aloud use of the F word, but when they say “We’re going to do a rubbish ballad,” we couldn’t agree more.

“We couldn’t bring our full band all the way over from Sweden,” announces the Popjustice approved and Mystery Jets haircut a like Erik Hassle. So instead he serenades the audience with simple acoustic arrangements on the only guitar that will be seen for the evening. His set is short with well crafted songs and a flawless voice that could easily slip into the mainstream if given the right exposure.

Then the new princes of the keyboard take to the stage in two chapters. Yes Giantess have a song called Deceptive Man, and believe us these guys are deceptive men. They may not look like hot lovin’ sex machines whose mission it is to make the ladies swoon, but they have a few cheesy yet sincere tricks up their sleeves. Witness lead vocalist Jan announcing that “Making love to a tambourine ruins my hand.” This guy doesn’t bash or hit a tambourine, he makes love to it. Get that girls. His band mates join in with the physical arousal, bouncing and thrusting against their synths whilst throwing their heads back in sweaty orgasmic excitement whilst their drummer pounds away in shorts. And for girls who want some lyrical come on action try “I just want to say that you’re beautiful, you’re looking incredible, girl you’re making everybody’s day,” from the immense Daft Punkish slow groover Tuff N Stuff and then be prepared to practice making babies.

Then there’s the music. We’d love to rifle through the Yes Giantess record box. It wouldn’t surprise us if we found Passion Pit, Michael Jackson, The Human League, Madonna, New Kids On The Block, James Brown and Cameo in there. This is a band that are clever enough to play the three killer tunes currently on their Myspace first and then throw down slab after slab of spunky grinding synth wash to get people moving. Ladies, they’re asking, and you’re dancing.

Mirrors (pictured) may also bring synths by the van load but they bleep and pulse from a different shadowy zone than Yes Giantess. As the room darkens a flickering electronic riff pulses out, whilst the bands name glows at the back of the stage. Suddenly it disappears and is replaced by a single white square projection and the band enter to a large cheer. The square becomes animated with smaller squares inside whilst Mirrors cover the crowd with lush ambient textured electronic noise. It radiates out across the room to create an atmospheric soundscape filled with pop melody. Abstract images and patterns develop from the square whilst haunting melancholy keyboards cascade into songs such as Look At Me; it’s all Blancmange meets The Human League meets OMD with a tiny bit of Ian McCulloch in the vocal. Yes it’s very eighties, yes its very cool and yes it’s very good. A Mirrors show is more of an evocative experience than a gig. Go experience.

It seems incredible that both Yes Giantess and Mirrors are still unsigned bands. Surely that cannot last ?
Posted by Breaking More Waves Blog at 00:01

Hello Anonymous. Well you're entitled to your opinion. That's the beauty of pop music.

Your real name isn't Scott Mills by any chance is it ?