The Maccabees - Wall Of Arms 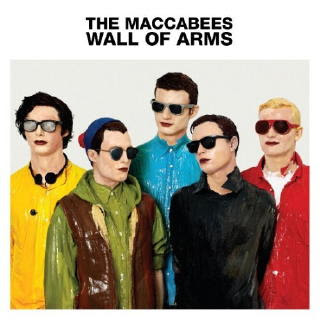 The Maccabees second album Wall Of Arms is an accomplished piece of indie guitar work that certainly won’t alienate their existing fan base, but is unlikely to bolster their following significantly either. It takes a subtle step away from the boyish charm of their debut Colour It In to a slightly darker place displaying more maturity. Markus Dravs, who has previously worked with Coldplay, Arcade Fire and Bjork brings a bigger sound to the bands repetoire, but the sound is still undeniably The Maccabees. Brash, frantic, repetitive guitar lines are still the order of the day and Orlando Weeks still turns a fine hand in delivering charming lines such as “I grew up in the bosom of my family, eight strong arms around me.”

The jewel of the album is No Kind Words. Here the band sound melancholic and restrained with Orlando’s bleak recital of the chorus “Alone alone alone, Not alone at all.” It’s designed to be chanted by indie rock fans in church like concert halls throughout the country. Elsewhere The Maccabees show that they can sound joyous without being overly pop in the same way that bands such as The Futureheads and Maximo Park have managed. On William Powers, they charge through with a blistering guitar workout, with Dravs surging Arcade Fire production at the forefront, as the song reaches for the stratospheres at the climax with its “Now now now now there’s something in it,” rabble rousing call. The Maccabees have obviously been doing their Arcade Fire homework with Dravs as the teacher on the song One Hand Holding with its exuberrant Win Butler styled "Oh Oh" backing. Sometimes however the songs are just too similar to the debut album, single Love You Better and Can You Give It being particular victims, but title track Wall Of Arms makes subtle steps away from the template with a carnival feel before ending in a solidly noisy way.

Wall Of Arms has enough tense dark guitar thrills to see them grow as a band with their audience. Maybe there is not quite enough originality, experimentation or creative commerciality to see them step outside the safety of the indie Brit guitar band ghetto, but there is enough to suggest that The Maccabees have left the door open and are tiptoeing over the threshold. The Maccabees are one step closer to delivering something of heavier musical weight.
Posted by Breaking More Waves Blog at 00:01

Email ThisBlogThis!Share to TwitterShare to FacebookShare to Pinterest
Labels: The Maccabees