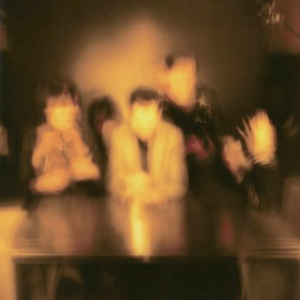 In the indie rock world of today where the debut album of many artists is considered their defining moment, commercial concerns often lead to album number two offering up a lesser version of the former, with a corresponding drop in sales and the inevitable parting of ways with the record label. In the case of The Horrors, a while back even album number two seemed just a dream. After just one long player release the band were dropped by Polydor leading to a distinct feeling that their haircuts were bigger than the hype and the band were destined for the trash can.

Anyone who had seen one of their exhilarating live shows, all flashing strobes, searing guitars and front man Farris Badwan stalking and climbing the stage like a man possessed would have known however that there was something more to this band. It seems that XL Recordings realised this, signing the group to their ever increasing diverse rosta to release album number two; Primary Colours.

Produced and mixed by Craig Silvey and Geoff Barrow of Portishead, with additional input from the renowned dark lord of video direction Chris Cunningham, Primary Colours is an album that sees The Horrors exceed their debut in every respect. This is certainly no lesser version of the former. A kaleidoscopic menagerie of psychedelic mystery, atmospheric noise, nightmarish brutality and brooding krautrock that recalls Joy Division, Psychedelic Furs, My Bloody Valentine and Jesus And Mary Chain this is an impressive, shocking album that shows that indie guitar rock can still create something beautiful out of a racket.

Take one listen to Who Can Say, a pounding art school cinema piece of work complete with swirling seaside pier organ and a tambourine stamped Phil Spector-ish spoken word interlude of “And when I told her I didn’t love her anymore, she cried,” and be amazed. This is a dark single minded album full of vast angry guitar and swirling vintage keyboards. Badwan’s baritone is trippy, echoing and hypnotic. It is a vocal delivery which has the same echoing garage atmosphere of Ian Brown on the Stone Roses classic debut. Scarlet Fields brings in droning bass, LSD weird noises and distorted vocals and wouldn’t have been out of place on one of the earlier darker Cure albums. Then of course there is the epic closer, Sea Within A Sea, a fitting climax to the album, with an ocean of pulsing sequencers drifting into the darkness. Whilst Primary Colours is possibly even less commercial than their debut, in terms of ability to take on influences but at the same time be bold in creative artistry it utterly succeeds.

Primary Colours is the sound of a band finding and properly defining themselves. Polydor you were wrong. Heres to album number three.
Posted by Breaking More Waves Blog at 00:01

Email ThisBlogThis!Share to TwitterShare to FacebookShare to Pinterest
Labels: The Horrors