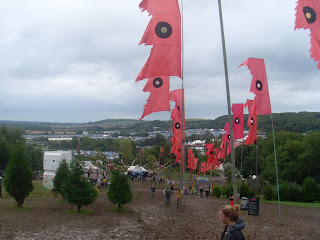 Last September Robin Hill Country Park, Isle Of Wight paid host to the fifth Bestival and the worst rain Breaking More Waves has experienced at a music festival since Glastonbury in the late 90’s. The site, normally a beautiful woodland and grassland country park, looked like the photo above. But now almost seven months on, the same location looks like this. 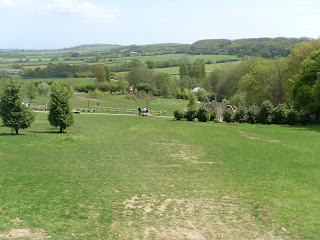 To say that the rain and mud at Bestival 2008 was cataclysmic would not be much of an understatement. The fact that the majority of the event was able to run at all in such conditions was miraculous, even if some stages such as the newly located BBC Introducing stage were rained off for significant parts of the weekend. With the Isle Of Wight receiving an amount of rainfall in twenty four hours that it would usually receive in the whole month of September, conditions were treacherous, muddy and desperate. But punters who left the site after three days of hard dirty partying, mud and mayhem to nice warm baths, didn’t have to endure what must have been one of the mammoth clear up operations of any UK festival.

Even Glastonbury, which has had its fair share of famous muddy years occasionally has a year off to allow the site to recover. Not so for Robin Hill Country Park which is a leisure attraction and has a business to operate for the rest of the year. Restoration works had to commence immediately. However even with significant reconstruction, the Isle Of Wight Spring Garden show due to be held in April 2009 had to be cancelled as the main area field, still being reseeded, would not at that stage have been able to withstand heavy traffic, particularly if the preceding week was wet.

Breaking More Waves recently had the pleasure to visit Robin Hill Country Park to see the work that has been carried out, four months before it once again welcomes the colourful sights and sounds of Bestival; and the work that has been going on is quite staggering. It appears that the field that has been used for the main stage for the last five years has been completely returfed, now a soft, lush blanket of green. The area next to this that houses the Bollywood Bar and a variety of other stalls and stages is being reseeded, and that grass is slowly beginning to take hold. New white gravel paths have also been laid and the hill that hosts the village and bandstand areas has also seen some significant returfing and reseeding works. Standing at the bottom of the valley on a sunny day at the start of May it is virtually impossible to visualise the carnage that occurred in the same place last September. This picture shows the area where the main stage has previously been located. 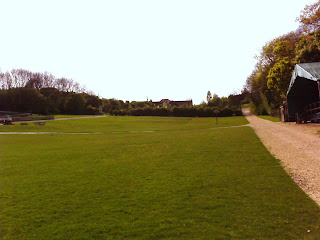 But now changes are afoot. It seems that after five years of gradually developing the site and improving the infrastructure, Bestivals head honcho Rob Da Bank is proposing a big site revamp this year. In order to mitigate some of the risks of a further bad weather situation the main stage is to be relocated to higher, possibly drier ground where the Big Top has been situated the last two years. This according to Da Bank will make the stage more accessible whatever the weather. The area that suffered the worst of the flooding, namely the bottom of the valley will be free from stages therefore reducing the risk of cancellations.

Here at Breaking More Waves we look forward to seeing the newly modelled site layout, and will be reporting back from Bestival later this year. As our Festival season is about to get underway, look out for reports from The Great Escape, Wychwood, Winterwell, Blissfields, Camp Bestival, Summer Sundae and Bestival itself. Fingers crossed for as little of this as possible....