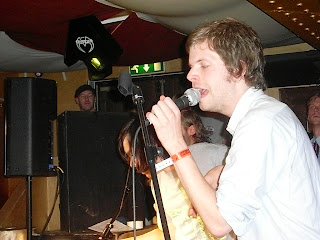 Day two of The Great Escape in Brighton brings more musical highlights than you can shake a treble clef at. The day starts slowly however with a so called ‘Gaymers Grassroots’ gig for The Maccabees at the Pavillion Theatre, a return to a smaller venue than they are now becoming accustomed to. In the same way that other alcoholic drinks producers have marketed their product to live music audiences, Gaymers are campaigning hard this year. Their contracts include a series of grassroots gigs of which this is one, where bands return to their hometowns to play small venue shows and acting as main suppliers of cider to a number of large festivals including Glastonbury and Bestival.

“Good afternoon cider drinkers” announces Orlando to the free alcoholic apple juice drinking crowd, as The Maccabees launch into a relatively straight set, starting with No Kind Words, some new songs, some old ones and ending with a brass enhanced Love You Better. Being an early afternoon gig the crowd are in parts restrained and part buzzing, Orlando identifying which parts of the crowd are being sensible drinkers and which are not. “You lot will be trouble in a few hours,” laughs Felix to the non-sensible. Its a workmanlike set, the group retaining their boyish awkward charm of old, but maybe it’s the time of day, or end of tour fatigue, but The Maccabees do feel a little ‘safe’.

Before The Maccabees, The Lyrebirds warm up the audience, bringing their blend of slightly gloomy but ambitious indie rock to the building as the room fills up. A guitar band with a slightly deeper sounding demeanour, they produce songs that have slight stadium aspirations but not enough originality or spark to be anything but a passing diversion whilst the crowd sup free cider.

After an early afternoon barbeque and DJ set at Audio, a battle with the seafront elements leads the windswept Breaking More Waves crew to the Moshi Moshi showcase at Po Na Na. If ever there was a strong argument for the relevance of record labels, this is it. Moshi Moshi have continued to release eclectic, quirky left of centre pop records, sometimes acting as a springboard for artists to enter the public consciousness. Whatever they put out you know its likely to have some merit. Without Moshi Moshi the world of independent music would be a less colourful place. The line up at Po Na Na demonstrates this perfectly with four superb acts.

“You look a bit like Noel Fielding,” jokes James Yuill to a member of the crowd. Unfortunately they are not quick enough to answer back with “And you look like a scientist or a geography teacher.” Or rather Yuill is the geeky looking, head bobbing laptop minstrel with an acoustic guitar slung over his back. Like a thinking mans Calvin Harris caught in the headlights, James is surrounded by his kit, the set up looking like an Apple Mac updated version of something last seen in the eighties when spikey haired keyboard wizard Howard Jones brought his one man show to the masses. Yuill combines bragging beats with sweet melodies, particularly on Over The Hills which is extended and disenfranchised from the original with a big old techno wig out. The combination of synthetic and organic led Breaking More Waves to choose James Yuill’s album as one of its albums of the year in 2008, and his cool meeting of Aphex Twin electronica and warm melodic folk wins hands down again today.

Up next is Slow Club . They are utterly fantastic. They remind old cynical heads why we go to gigs in the first place. Starting from the back of the venue, they sing unplugged and walk through the rammed crowd to the stage. With them they bring country styled acoustic pop, charm, great songs, humour and tales of dropping beer from balconies of Paris houses that look like seventies styled coke dens. Every song they play makes hearts swoon and leap clouds. Most perfect is When I Go (video below) which questions the spark in a relationship “If I get to thirty and I don’t have a wife, I’ll ask you nicely but won’t ask twice,” they coo before questioning at the end “Will you hold my hand when I go?” It’s simple, beautiful and perfectly harmonised. Rebecca stands and bashes the small drum kit with real energy whilst still somehow managing to sing perfectly. Even when a song falls apart at the start their radiant charm makes it seem like something special. So wonderful are they tonight that Breaking More Waves almost has a tear at the end as they finish back in the middle of the crowd playing unplugged again. Consider ourselves smitten with Slow Club. Maybe even love.

Casio Kids (pictured) from Norway swing from the beams of the ceiling, have a singer that looks like a younger version of Beck, a bass player who sports a ruffled shirt and maroon flares, another singer that looks like a surf dude and sings falsetto and sound like an indie electro claypso version of Royksopp dancing drunkenly on the tables with Hot Chip. The vibes are happy, happy happy and the grooves are delicious. Twenty four hours later Casio Kids country will win the Eurovision song contest. We need to watch out for these Norwegians you know.

It’s left to The Mae Shi to mess things up at Po Na Na. The Mae Shi are like nothing you have seen before and nothing you will ever see again. A brutal, screaming, barking chaotic melee of different sounds that punch, pummel and party the air so hard it’s a wonder that they don’t leave holes in it. When they’re not trying to detonate the room with their noise art they’re throwing a parachute over everyone to cover heads or climbing over speaker stacks to the higher levels of the venue. There is a raw intense energy to what they do that connects with the crowd and depending on your perspective it's either scary, entertaining, funny, savage or just plain stupid. Or maybe a combination of any of these. A ferocious band that will one day probably spontaneously combust as they play. In the words of a certain Mr Rascal "Bonkers."

After such mayhem in a small space the vast 1200 capacity Corn Exchange is Breaking More Waves last stop for the evening. At this event last year Mumford & Sons were third on the bill in a venue a third of the capacity. Shortly after we arrive we hear that security is now operating a one in one out policy, such is the increased popularity of the bluegrass influenced group. The band look a little over whelmed by it all, but still manage to get the crowd to shout the word “Down” after they say “Hoe.” And a hoe down it is. This is a whole new experience for Mumford & Sons. There are people moshing near the front and young girls are screaming at the band. The group still deliver a note perfect soulfully harmonized set however, even if the huge space loses some of the subtleties of Marcus Mumfords beautiful croon on songs such as The Cave and Little Lion Man.

It leaves Metronomy to finish the evening. With a new line up Metronomy seem to have deserted the band they once were and attempted to become a more organic live act with two new members, including a female drummer. Unfortunately the updated model sounds like they would have been better sticking with the old banger. This new vehicle seems to have little mileage. The music fails to connect in any way feeling staid and lifeless. It's the only low of the day. Time for bed again Brighton.
Posted by Breaking More Waves Blog at 00:01