Alessi's Ark - Notes From The Treehouse 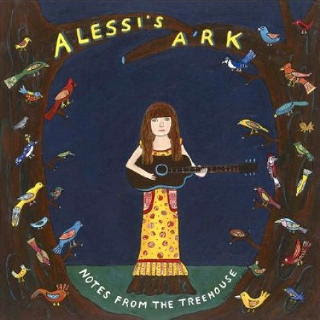 Until recently only one of the artists we named in our Ones To Watch 2009 list had actually released an album. That was White Lies, who managed to sneak to number one in the UK LP charts near the start of the year. In the next few months however a large number of those we named will be putting out their debuts and the second act out of the blocks is Alessi's Ark.

Back in December we stated that Alessi Laurent Marke was unlikely to find huge commercial pop success, but was certainly an act that deserves to be championed. Her album Notes From The Treehouse gives us no reason to change that statement. It is a delightful album full of dreamy sounding American folk, subtle symphonics, and acoustic sounds which is underlain with guitars that twang and Alessi’s pretty girlish vocal. It will be cherished by a small audience who have been, or will be, swooned by her innocent summery sound. It will not be too every persons taste. Some will find it too twee vocally; Adam Buxton and Joe Cornish on BBC 6 music radio station recently portrayed Alessi as the pixie queen singing about worms she had found in her garden. Her sound is more 'Folk Of The Faraway Tree' than 'The Exorcist' that is for sure, but there is an audience out there who will appreciate the sound of such enchantment.

The album opens with Magic Weather, an enchanting almost orchestral pop piece with warm strings, fairytale harp and Alessi’s wondrous voice which is equal parts Bjork, Joanna Newsom and Raissa Khan Pranni of The Mummers. Followed swiftly by the two singles The Horse and Over The Hill, these two tracks set the backbone for the majority of the album, a collection of dreamy sounding country pop songs, coated with Alessi’s very precise saccharine vocal.

Those who have seen Alessi play live may be surprised by the levels of production on the album. Mike Mogis of Bright Eyes has worked with Alessi to help her achieve a much fuller sound. Songs such as The Asteroids Collide are given a lush string laden polish, whilst Hummingbird is full of quirky orchestral moments, Alessi’s voice quivering as she sings “Close my hand tight we will survive the night.” However elsewhere Woman is left sparse and haunting, a song suited for the dark and candlelight. Likewise a secret hidden track at the end of the album sounds like something Coco Rosie could have produced, all fractured creeping percussion and eccentric instrumentation.

There’s a sense of musical wonder and magic that pervades this album, together with some delicately charming melodies. It certainly won’t be fighting with White Lies for chart positions, but is all the better for it.
Posted by Breaking More Waves Blog at 00:01