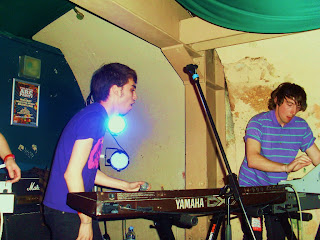 The third and final day of The Great Escape in Brighton starts with an Irish music showcase upstairs at The Prince Albert. It’s still very early and many heads in the audience probably warrant Valerie Francis and her comforting warm voice to revive them from the previous nights proceedings. Her songs use unusual instrumentation such as hand bells, trumpet and recorder alongside acoustic guitar to produce a gentle soothing calmness to a short set which is only interrupted by the ringing of a mobile phone of the next artist Iain Archer.
Archer is most probably best known for his work with Snow Patrol, being the co writer of the song Run. But whilst Snow Patrol continue to fill arena sized venues, Archer is playing to a handful of people in a Brighton pub. “Glad to see you’ve left some space for dancing at the front,” he jests at the emptiness. Later he jokes about the mobile phone incident. “This is a mobile free zone - that dick, you know the one.” It seems that every earnest male singer songwriter these days packs themselves off to a cabin or shed in a forest somewhere and is inspired to create poignant music, and Archer has joined that crowd with a new album To The Pine Roots. Explaining that the record was recorded in a cottage in Schwarzland in Germany’s Blackforest he plays a number of songs from it. The Acrobat has a lilting drifting softness and visual captivating words that tell the tale of a gravity defying hero. It sounds a little like an Irish Bright Eyes. Before Frozen Lakes he talks of confused ducks sitting on the frozen water. Archers voice is light and slightly dreamy and his sense of humour makes him an engaging performer.

Angel Pier are the first band of the day and take a traditional approach to chiming melancholic guitar rock. They are hardly original or particularly inspiring, but develop a neat sense of atmosphere with their layered guitar approach which momentarily spirals and soars to higher places. By the end of their set the Prince Albert is packed and a queue leads all the way down the stairs, but nobody is going anywhere because everyone here wants to see Fight Like Apes . There are people craning their necks and standing on chairs to get a view of the band.
We’ve raved regularly about Fight Like Apes, for example here and here and today is no exception. Taking to the stage with false black eyes and cuts on their heads, Fight Like Apes are without doubt the best band from Ireland right now. Bono did you hear that ? Fight Like Apes are like the most pleasurable fistf**k from a stranger you could ever have. With Maykay head slamming like she’s trying to shake her brains out and Pockets seeming to disappear into the ground as he bends ever lower and lower to reach his collapsing microphone stand, the band drill hardcore pop into the crowds ears like the world is about to end. They throw milk crates at each other, Maykay writhes in the crowd and despite technical problems with one of the synths they create a glorious energetic violent performance which is offset by their good nature and slightly humorous approach. Any band that can write a lyric such as “No black bits and no cheese, its just plain toast for me, and did you f*ck her, did you stick things up her?” before joyous synths and guitars collide is always going to get our vote.
Next its down to the seafront and Arc for Gold Teeth, who we wrote about just a few days ago. Their charismatic, good looking singer Joe De Costa could certainly make a few girls hearts melt. He even succeeds with that today, particularly on the danceable Everybody and next single Tasty which manages to sound like a hybrid nutty boy cousin of Madness in the verse and early Blur in the chorus. A couple of songs remind us a little of Hard Fi which is not so good, but these are early days for the band.
Then there is just one band left to see. That band is Yes Giantess (pictured), a band that we first tipped as a One To Watch last December and have been getting continually pumped up about ever since. First a more low key gig at Arc, their first ever in the UK, followed by a late nighter at the Neon Gold records party at Ocean Rooms; both sets deliver - big time. Jan Rosenfeld and his cohorts whack down layers of star bound synths that groove like a vodka fuelled space ship. With heads bobbing in unison and high handclapping a plenty this band have beats thrusting out of them like a sex starved disco queen. Tuff N Stuff is the tune of the event. No question. But it’s not their only song that we get all over excited about. When The Sun Gets Low is equally good. Here Yes Giantess bring to Great Escape heavy clubbed up beats and spunky eighties hallucinatory keyboard riffs that would get even a corpse up dancing. We’ve said it before and we’ll say it again - Love it love it love it.
Posted by Breaking More Waves Blog at 00:01