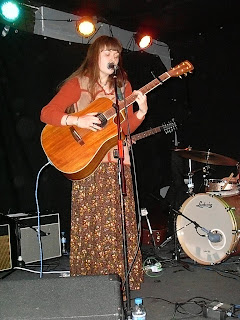 A nearby funfair punches out blasts of hyperactive techno, but over the road in the Freebutt, Alessi Laurent Marke and her band are producing songs that are more fairytale than fairground. Yet the only children’s story you would normally associate The Freebutt with would be one by the Brothers Grimm. The place is certainly not salubrious, with its down on its luck character and stinking toilets, but this doesn’t seem to bother Alessi at all. “What a nice night,” she starts, before adding later “It’s like a dream room, who is good in Brighton is in the room.”

If this is a dream room, then the music of Alessi's Ark is perfectly suited to it. Dreamy and fleshed with a country twang, her band are subtle and restrained; allowing Alessis’s gentle wistful voice space to be heard. Her vocal is innocently childlike yet strong, even after promises of vocal surprises due to a cold “Not the piggy flue,” she adds. Highlights of the set include the opening haunting Hummingbird, The Horse with an initial rhythm tapped out with a drumstick on the keyboard and The Asteroids Collide, played as part of an encore which she didn’t seem to expect to receive. “I’m an encore virgin,” she beams.

In the live environment Alessi is a delicately engaging performer, more relaxed and confident with her own small audience than when we last saw her supporting Mumford & Sons in Reading. The centre of the sound is Alessi’s voice; a number of the songs start and finish abruptly after she has finished singing, but the music and melodies are also pretty and vulnerable. So with the funfair forgotten, Alessi’s Ark manage to transport the small Brighton audience to a very different world than that of a smelly black room pub venue. At its best it’s a magical, enchanting world.
Posted by Breaking More Waves Blog at 00:01