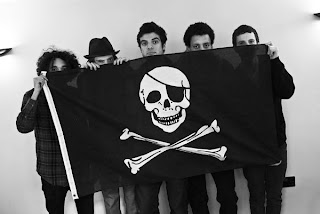 Since Vampire Weekend first hit the airwaves, we’ve been surprised that there haven’t been more indie / afrobeat bands trying to get a slice of action. However in Gold Teeth we find a wonky pop group who take some of the quirky rhythmic sensibilities of said band and add to it elements of calypso, reggae, electronica and Britpop to create something with enough spark to convince us that they could be going somewhere.

Their song Tasty takes a mellow slice of Madness and Blur and squeezes it in a way that convinces us that modern life isn‘t so rubbish after all. Then there’s This Cartoon, which sounds like a summer beach party held in outer space, with a mellow pulsing electronic vibe. Gold Teeth also have a nifty little single entitled Everybody, it's a track that really gets our groove on. Sounding a little like the middle section of One Pure Thought by Hot Chip, it makes us throw stupid bent double drunk dad disco dancing shapes to its infectious tropical electro sound. Lead singer Joe Da Costa delivers the infectious hook of “Everybody wants to see, that you don’t even look at me, no you don’t even love me,” before repeating over and over “Everybody is everybody”. Give it one listen and you’ll be singing it in your sleep. You have been warned.

Toothpaste kisses of a golden kind that will give you a million dollar smile.