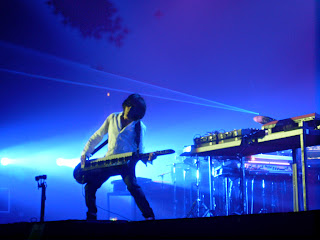 French synth wizard Jean Michel Jarre is probably better known for his huge and spectacular futuristic sound and light extravaganzas where he illuminated cityscapes all over the world. Rendez-Vous Houston with its record breaking estimated live audience of over one million and Destination Docklands for which he sold over 200,000 tickets are probably some of the most colossal shows ever staged. Therefore to see Jarre playing a tour of arena sized venues seems almost strangely intimate.

That is not to say that Jarre still isn’t thinking big. From the start of the concert where he emerges from a pyramid shaped mass of smoke and lasers like a spectral being with keytar in hand, to the gladiatorial Second Rendez-Vous which brings images of the apocalypse, all flashing strobes and cacophonous beats, Jarre still puts on a big show. To create such an experience Jarre uses visuals that are simple in their operation, but complex in delivery. There are no obscure pseudo arty film projections, or huge banks of lights typical of shows by Britney Spears or U2. Instead Jarre relies on a multitude of lasers, dry ice and singularly powerful flashing coloured spotlights to create a spacey atmospheric gig.

Jarre may have never been considered particularly hip, but his music has a legacy of influence. Kraftwerk, Orbital and Aphex Twin all owe a debt to Jarre’s pioneering sounds. As he wheels out what is effectively a greatest hits set there are moments where you can hear elements of rave, ambient house and techno but much of this was created long before these genres had even been invented. Occasionally the tunes veer into self indulgent prog, particularly when he straps on his keytar, but even this can be forgiven as the plethora of lasers keep everyone entertained.

Jarre himself is a massive showman, punching the air with glee between pieces, bashing hand cymbals and running through the waves of dry ice that fill the room to greet his fans. Sometimes he comes across like a mad professor having fun in the lab as he twiddles knobs and presses buttons smiling crazily to himself. Variation from keyboards comes from one track played on a theramin and another on accordion, but for the most part it’s electronics all the way.

Electronica can often be criticised for having little emotional soul or intimacy, but Jarre manages to capture the heart several times. On two occasions he comes to stage front to use a laser harp (video shot by Breaking More Waves below - now the is it live or not arguments begin, but this clip suggests it could be), which plays a note each time he breaks a beam. It’s a quiet and relatively still moment away from the lush sprawling pulsing synth sounds. Then there’s the poignant moment when he dedicates a song to his father who died just a few weeks ago - it is widely known that Jarre did not have a good relationship with him. These moments are rare though, the majority of the set being satisfyingly uplifting without ever reaching a deeper emotional core. Such emotional depth is not necessary though - he leaves back through another pyramid of dry ice to a standing ovation.

The Laser Harp is 100% live. The gloves reflect light back down to sensors on the stage floor, which triggers the note.

At the Birmingham show on Sunday, during Rendez-Vous 2, he briefly went hopeless out-of-time with the rest of the musicians. There's no way that was mimed!

I was at the front row just to the left of the harp, and noticed that an extra note played even when JMJ did not strike any of the beams. Look closely at the blogs YouTube video at the very start when Jarre gives a pratice run and just towards the end an extra note is played.I saw the Paris La Denfence concert and Jarre stopped hitting the beams too short of the R_vous2 part and the track kept on playing........hmmm I am a major fan of jarre but sadly i'm still not convinced its a live instrument.

Yes I think this debate could run and run. Is it live ? Isn't it ? How much of a Jarre show is really live and how much is pre-programmed ? And does it really matter ? Answers on a postcard please....