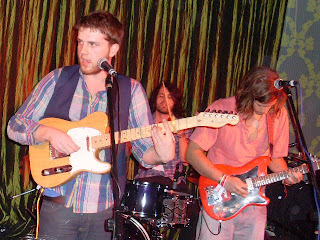 With its central glass dome, black interior, wall lampshades, patterned wallpaper, decorative mirrors and flamboyant bar the Hanbury Club has always been one of the most exotically retro venues in Brighton, recalling the 1920’s in its ambience. This lends a sophisticated feel to Communion, the new folk club, direct from London for its opening night in Brighton. Not that everything here fits under the easy label of new folk.

The Agitator is the new project of Derek Meins. Sporting 50’s styled slicked back hair and braces, The Agitator means business; delivering primal, visceral acappella rock and roll with just heavy thudding drumming to back him. His mouth contorts in rubbery shapes as he howls his way through a raw undiluted set, including Mr Wolf, a song about bills you can’t pay.

If Gary Barlow from Take That that was a little younger, had grown a beard and sported a waistcoat he may look a little like the lead singer of Cherbourg (pictured). Their songs fall into two camps. The first are almost medieval folk songs, such as set closer Never Love Again which is full of fiddle and chanted melodies, a song that is as sprightly as a child dancing around the maypole. The second are more straightforward brooding and building guitar rock songs such as Scattered at Sea, which has just a hint of Gary Lightbody from Snow Patrol in its vocal delivery. The band gush about the other acts on the bill and are obviously delighted to be playing, and by the end the audience appear equally as delighted with Cherbourg.

Peggy Sue have evolved somewhat since Breaking More Waves last caught them live. Then they were known as Peggy Sue and the Pirates. They are still resolutely lo –fi, mixing elements of blues, soul and alt. folk together in a slightly scrappy detuned style. But now they flesh out their material with accordion, ukulele and a drummer who bashes and clatters heavily, occasionally sounding like the start of a war march. Katy Klaw is dressed in an Eminem T Shirt, a reference and influence which seems about as far away as you can get from the sound they make. There are lyrics concerning sins and forgiveness on Lazarus, stomping changing time signatures, and a cover version of a Missy Elliot number. They remain quirky, odd and charmingly uncommercial despite their big bluesy harmonies doing their best to make them more accessible than their lo-fi leftfield acoustic sound really is.

The late night graveyard shift is left to Beans On Toast. Beans On Toast stands on a chair, elevated for easy viewing. With just an acoustic guitar and a gravel rough voice his performance is a mix of the comedic, personal and political. “You don’t like me in Brighton, because I make jokes about gays,” he gamely grins at the start of his set. Then as everyone begins to clap along to a simple riff, he announces “Let’s all clap hands,” pauses and then adds “F*ckin’ queers”. There’s plenty of laughter. Beans On Toast gets away with what could be conceived as arrogance and homophobia through his cheeky humour. With songs about rich kids in the music business and being old “Just turned 28 and going bald,” he wins virtually everyone over. “I think this is the best Beans On Toast gig ever. I’m gonna crowd surf in a minute,” he jokes. From way up on that chair it’s probably a blessing that he doesn’t as it’s a long way to fall; if he did though you get the feeling that he would be held triumphantly above the crowd in the manner of a rock star.
So the first Brighton Communion is a success. Breaking More Waves will be back for more soon.
Posted by Breaking More Waves Blog at 00:40