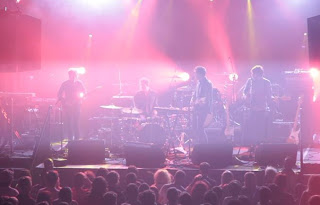 Our next suggestion for Ones to Watch in 2013 first appeared relatively quietly on Breaking More Waves back in July. Since then Sons & Lovers (not to be confused with the melodic hardcore band from Orange County, California - yeah we've never heard of them either) have been going about their business, with a minimum of fuss or over excited press attention, playing shows and impressing wherever they play. They’ve gigged alongside the likes of Kyla La Grange, Walk The Moon and Luke Sital Singh with a live set that is impressively slick for a new band - it almost feels like watching a group that have been playing for years. Scrappy is not a word to be used in conjunction with Sons & Lovers, though it’s worth noting that not all of the band are new musicians, as we posted back in July lead guitarist Tim Hillier-Brook used to be in Brighton UK metal core band Architects.

It seems that the band were originally a two piece but have now expanded to a four piece and play songs that have undeniably rich and accessible melodies. Add to this a lead singer who we suspect quite a few ladies (and some gents as well) are going to grow big crushes on and Sons & Lovers have all the ingredients in place to do that basic musical maths of good songs = success.

There’s very little information out there about Sons & Lovers at the moment although we understand there’s a forthcoming EP and an album due at some point in 2013 (we suspect the later part of the year) but for now enjoy the two songs that they’ve put online below.

Email ThisBlogThis!Share to TwitterShare to FacebookShare to Pinterest
Labels: Ones to Watch 2013, Sons and Lovers