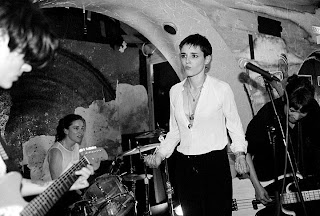 Savages are a four piece from London consisting of Jehnny Beth (real name Camille Berthomier - previously a member of alternative lo-fi indie outfit John & Jehn), Gemma Thompson, Ayse Hassan and Fay Milton. They create music rammed full of art-cool passion, intense energy and a dark old-school indie punk sensibility. The group have so far released their debut single Husbands / Flying To Berlin and followed it up with a 12” live EP. They’ve also found themselves the stars of a recent episode of live music TV show Later With Jools on BBC2.
Savages are hardly likely to be fighting off Katy Perry or Calvin Harris for no.1 spot in the pop charts, but it’s in the live arena that they command. “Our intention is to create a sound, indestructible and musically solid, written for the stage designed with enough nuances to provide a wide range of emotions,” they state on their website. With a mixture of caustic shrieking and dagger vocals lead singer Jehnny provides the focus for the bands intense stage presence. Combine that with Savages snarling, ears bleeding, wall of sound guitar work and their stated vision is pretty much achieved already. The question now is can Savages transform the momentum of their live shows (they're certainly one of the most thrilling new UK guitar bands out there) into something longer lasting once the adrenalin fades? Or in a years time will we have a slightly average and underwhelming album that doesn't transfer the urgency of the gigs? This will be the bands biggest challenge in 2013.
Savages - Live From The Shacklewell Arms

Email ThisBlogThis!Share to TwitterShare to FacebookShare to Pinterest
Labels: Ones to Watch 2013, Savages

That snare drum sounds more retro than Joy Division. Blissfully courageous...it's like visiting an old friend from your childhood that ain't seen in years. Welcome back.