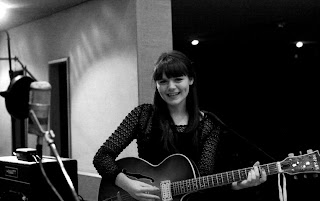 Whilst some of the artists in the Breaking More Waves Ones To Watch for 2013 list such as Chvrches and Haim can be associated with the deafening buzz that kicks off every year for a small number of bands and has nearly the whole music industry (and admittedly ourselves) drooling with over expectant anticipation, today’s artist is somewhat different. But just like those first 2 acts we mentioned in our Ones to Watch 2013 posts, our final choice - Alice Jemima - will be a name that is very familiar to regular readers of this blog. Yet her transition from unknown artist to established singer songwriter is gradual and organic.

Spotlights are beginning to turn on Alice since the release of her debut self-produced demo EP All The Boyfriends this September which has touched hearts all over the place, leading to radio plays on the likes of BBC 6 Music and Amazing Radio (where the song went into the stations top 10 chart), a session being recorded for Rob Da Bank’s Radio 1 show for future broadcast, quality support slots including a forthcoming show in London as part of the House of St Barnabas Autumn Culture Series with Kitty, Daisy & Lewis and Lulu James (here) and a number of labels and music industry figures showing interest. 19 months after we first featured her on the blog, it’s about time that we named her as One to Watch, even though we've been watching (and listening) all this time.

So what is it about Alice Jemima?

She’s one of only two artists this year to sing something that had such warmth, such tenderness, such beauty, that it made us shed a tear when we stood in a room and watched her play it. She’s also one of the most prolific artists we’ve come across since this blogs inception, being able to create wondrously delicate yet serenely strong pop songs seemingly at the press of a button. So irrespective of record deals or not she's almost bound to continue to push out wonderful new songs. And then there’s that voice; a voice that has a sense of calm sweetness that we could listen to all day.

Alice’s music – a combination of simple restrained Hofner guitars and occasional beats will undoubtedly be our sound of 2013, but we strongly suspect we’ll still be playing her songs in 2023 as well, irrespective of commercial or critical success.

There’s a possibility that by the end of 2013 you might love her as much as we do; it's why we're concluding this series with Alice Jemima - saving one of the best till last.

Alice Jemima - By Your Side

Email ThisBlogThis!Share to TwitterShare to FacebookShare to Pinterest
Labels: Alice Jemima, Ones to Watch 2013