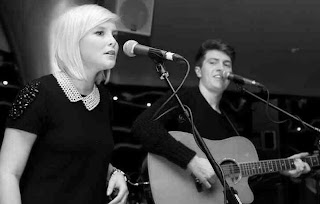 Imagine Slow Club jamming with Ben Howard. Then imagine that they decided to cover Be Careful by R Kelly & Sparkle. Now you don’t need to imagine any longer. For it’s time to welcome today’s One to Watch for 2013.

Until just a few days ago this duo was called Saving Grace. Then they announced via their Facebook page that changes were occurring. “So we had to change our name today, due to the fact that we weren't the only Saving Grace in town! But after a lot of thought, we came up with a name we like just as much, and hope you do to!”

So say hello to Chasing Grace, a very new act who (we suspect) you’re unlikely to see on any Ones to Watch 2013 list except this one. Not because they’re not good, but because it's still very early days for this young duo. Chasing Grace have yet to put out a single (their debut EP Dinner Will Be Served is due for release early next year) and the only material that exists on line are two You Tube covers (one of which is the aforementioned Be Careful) and a stream of a live version of the title track of the EP. They did have a Soundcloud page but that has mysteriously disappeared and as the You Tube songs are still under their old band name account we’re not sure if these will stay on line for much longer – so catch them whilst you can. (30th November update : Sure enough the You Tube account has now been deleted but one of the videos has been uploaded to a new account and streams below, although the audio of Dinner Will Be Served remains absent for now)

Chasing Grace consist of 19 year-old Philip Plested and 17 year-old Grace Ackerman. Their music consists of boy-girl vocals and simple acoustic guitars. They’re only just getting going, so why not embrace the new and jump on board with them early.

If there’s one act in this series that is more likely to appear on other Ones To Watch type lists at the end of next year (rather like when Marina & The Diamonds and Clare Maguire appeared on the Breaking More Waves Ones To Watch list a year before they appeared on the BBC Sound of List) it's Chasing Grace. Or by then they may have given up and moved on to pastures new. Let’s keep an eye and ear on how they do.

Email ThisBlogThis!Share to TwitterShare to FacebookShare to Pinterest
Labels: Chasing Grace, Ones to Watch 2013