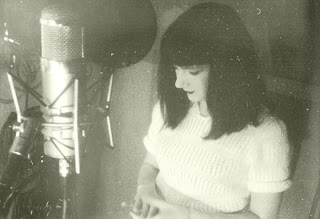 The industrial pop din of Curxes recent single Spectre may already be a distant memory such is the speed at which the internet turns over new music, but now the UK south coast duo have released a video to accompany the song and plug it back into the sockets of our brain. The music may have an aggressive punch, but this layered animation created by the bands lead singer Roberta Fidora (pictured above) is more compassionate, dealing with loss, depression and having the people to save you from that. You’ll probably need to watch it a number of times to take it all in; from the floods, the spinning silhouetted buildings (if you live in the Portsmouth area you may recognise many of them) and the record titles referencing the storyline of the video.

Spectre is available to purchase via iTunes or on good solid vinyl from the bands shop (here).

After a number of recent live dates, Curxes take a break from raging your senses until next month when they'll be playing a show in a town once named as the second best place to live in the UK - Leigh on Sea. It may seem an odd choice of location to play, but let us not forget that a certain Depeche Mode (who make an appearance of sorts in the video) originated from only 10 miles further down the road. The gig is part of The Christmas Box at The Ship and takes place between 7pm and 1am on the 14th December.

In addition to the video, floating through the sea mists comes this haunted galleon of a remix of Spectre from Rudi (better known as DJ Dave Saunders) ready to haunt your thermal underwear off with its ambient nocturnal horror film soundtrack style. It's available as a free download.