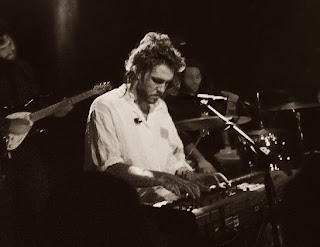 Likely to appeal to those who enjoy Bon Iver, Nick Drake, Jeff Buckley and Scott Matthews, our eleventh One to Watch for 2013 is a bit of a slow burner. Australian singer Matt Corby independently released his debut EP Song For in 2009 before relocating to London and signing with Communion Records. A further 2 EP’s followed. He first appeared on Breaking More Waves in February of 2012 where we asked you to ignore the man’s obvious good looks and focus on the bit that everything else aside is always the most important, the songs. The track that caught our attention then was Brother, which eventually made its way onto his new EP Into The Flame released this month. We’re hoping that with this gradual build of releases 2013 will be the year that Matt Corby takes that bold step onto an album and his voice, a wonderful raw mix of throaty rock sensibilities, soul and tender folk simplicity will engage with a UK (and worldwide) audience.

Oh, and the bit that we forgot to mention? Yes, when he was just a boy with stars in his eyes he was the runner up on Australian Idol. But let’s not hold that against him, after all the show also gave us the talents of Lisa Mitchell, whose song Spiritus would easily make it into our year end top 20. Maybe by December 2013 Corby will have an album in some of the end of year lists?

Email ThisBlogThis!Share to TwitterShare to FacebookShare to Pinterest
Labels: Matt Corby, Ones to Watch 2013