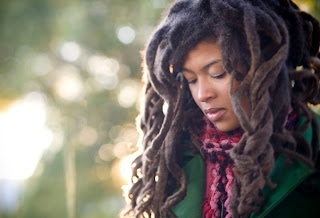 Our penultimate One to Watch for 2013 is Valerie June. Her music is raw, traditional, organic and massively old fashioned and yet still sounds fresh, honest and moving. On first listen she reminded us a little of a country and delta-blues version of Joanna Newsom in the uniqueness of her vocal and the way her songs are constructed from guitar, banjo and ukulele. Listen and you’ll hear that there’s gospel, there’s soul and there’s that undefinable quality that enables a new artist to grab something based in the past and make it sound ready for today.

Valerie first played in Breaking More Waves home country of the UK at the festival we adore the most - Bestival - on the Isle of Wight this September and has kept this association alive by signing to one of our favourite and most eclectic record labels Sunday Best. An album called Pushin’ Against The Stone will be released next May. Adding to the sense that Valerie deals in rawness, several of the songs on the record have been written by Dan Auerbach of the Black Keys.

With her snaking medusa-like hair June cuts a visually mesmerising figure and her music does much the same. Workin’ Woman Blues is the introductory single and was released this month, it streams below together with a video for a cover of the Sam Cooke tune Bring It On Home To Me. Workin' Woman Blues cocktail of groovy horn stabs and pedaling madly guitars gets under the skin and has us nodding along in reflective agreement.

Unless there’s a radical shift in the music taste of the general public Valerie June won’t be hitting the top of the singles or albums charts, but those who enjoy her style of roots based music we suspect will find something to treasure and a little bit timeless.

And that is nearly it. We’ve presented 14 of the 15 artists we believe are Ones To Watch for 2013. There’s just one to go. Who could it be? It feels like we’ve forgotten someone. Regular readers of the blog or our twitter feed will probably have guessed by now. We’ll see you tomorrow for our final choice and see if you’ve guessed right.

Valerie June - Bring It On Home To Me (Video)

Email ThisBlogThis!Share to TwitterShare to FacebookShare to Pinterest
Labels: Ones to Watch 2013, Valerie June