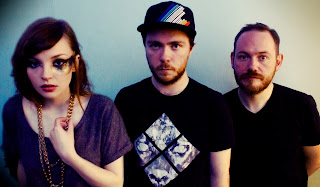 Breaking More Waves first One to Watch for 2013 should come as absolutely no surprise to regular readers of this blog. Chvrches tick every box in our thumbs up checklist. Not that love of music should simply be a box ticking checklist. There has to be more than this. Sometimes the band might have the right sound, the right look, the right attitude and yet that indefinable something , let’s call it soul for want of a better word, is missing.

This Glasgow based electronic pop trio have that indefinable something.

Ever since their debut song Lies – a mix of Gary Numan style computerisations and Fix Up Look Sharp beats - first slammed its way into our ears via the still-on-it boutique pop label Neon Gold under the name Churches we were hooked. (See our original post from May of this year here which followed a day or so after Neon Gold’s). Its synth driven beauty was muscular, rougher and dirtier around the edges than a lot of current electropop; it was the metaphoric sound of someone having unbridled sex straddled over a keyboard.

A few months later and the blogs went even more ga-ga orgasmic as the band replaced the ‘u’ with ‘v’ and delivered the infectious The Mother We Share, an altogether different work that found comparisons with the likes of Purity Ring and The Knife.

So the buzz / hype had kicked in. Which is all well and good, but if the band doesn’t possess enough decent material and the right attitude to deal with it, they’ll soon be drowned out.

Thankfully it seems that Chvrches have both. Iain Cook, Lauren Mayberry and Martin Doherty, the three members of this collective, have all been in other bands. So they are not naïve to the music industry and its workings. Plus the reports from early shows this year (they performed their first gig under the name Shark Week) have been 100% complimentary. Likewise the songs they've been performing on a Radio 1 session this week, including the magical We Sink (featuring male rather than their normal lead female vocals) and the electroclash pulses of Science & Vision sound impossibly good. So we absolutely believe Chvrches are more than capable of riding this wave.

Let’s sing the praises of these new dirty angels of modern synthpop. It’s why we’re listing them at number 1. Heaven isn’t just found in the house of god.

Email ThisBlogThis!Share to TwitterShare to FacebookShare to Pinterest
Labels: Chvrches, Ones to Watch 2013