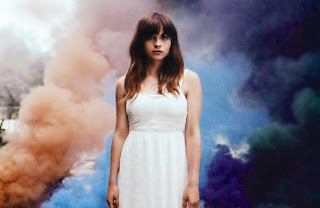 It’s not often that Breaking More Waves gets the chance to say that an artist that we’ve been supporting for the last year and a half on the blog could have the possibility of a number 1 single or even an outside chance of the Christmas number 1, but Gabrielle Aplin, a 20 year old singer songwriter from the Bath area is just that.

In a way watching or listening to Gabrielle cover Frankie Goes To Hollywood’s The Power Of Love (one of the best Christmas singles ever that isn’t specifically about Christmas) is observing things come full circle, because it was some of Aplin’s early cover versions uploaded to You Tube that helped her develop a fan base in the first place. Of course there are hundreds of artists attempting the webcam-bedroom-cover route of exposure but there are two simple reasons why Aplin rose elegantly above the competition. First, her voice. It has a warmth, maturity and gentle softness that cossets the ears. Second, she also has the ability to pen a more than fair tune herself.

Aplin is yet another rising star that shows the new model for some record labels. With less spare cash to throw around majors have become more risk averse and are therefore less willing to stump up money for development deals. Instead these labels prefer an artist like Aplin (Ed Sheeran is another example) who has done much of the ground work herself. Her first three EP’s (all self-released) have sold more than 60,000 copies, she runs her own active Facebook and Twitter accounts and engages with her fans on a much more natural and personal level than any PR guru run social media account could. It was therefore no surprise to find out last year that Gabrielle Aplin had inked a deal with a major label.

Her debut single, her own composition, for Parlophone was due to be Please Don’t Say You Love Me (watch here) but since then plans have changed. Her cover of The Power Of Love has now been announced as the song to soundtrack the John Lewis Christmas advert and Please Don’t Say You Love Me has been put back till next year.  If the UK has to have another cover version for a Christmas number one, we’d like it to be this.

What 2013 will bring for Gabrielle Aplin remains to be seen. There will be an album for sure and that means more alluring songs. But there's also a danger that she could end up being perceived as just 'that girl that did the Frankie cover'. We hope not, as there's a deeper strength in her own material. For these reasons she has to be One to Watch for 2013.

Gabrielle Aplin - Let Me In

Email ThisBlogThis!Share to TwitterShare to FacebookShare to Pinterest
Labels: Gabrielle Aplin, Ones to Watch 2013

I think you've hit the nail on the head regarding Gabrielle Aplin. If she'd released 'Please Don't Say You Love Me' prior to featuring in the John Lewis advert (a la Ellie Goulding), then she wouldn't have the cover albatross around her neck. It's similar to Charlene Soraia last year - her cover of 'Wherever You Will Go' is a million miles away from the sound of the rest of her album, which veers straight into psychedelic territory, yet that is the song she'll be remembered for.

And even if POL becomes her albatross, at the very least, the exposure from having the song in the advert should give her the profile to keep on touring for a good few years to come.

Now, if only someone would use I Am Not Lefthanded's piano cover of 'Screamager' by Therapy? in their Christmas advert...

Yes it's going to be interesting to see how this all pans out. It's one thing I enjoy about these One to Watch lists is looking back a year later and seeing what actually happened ! The great guessing game of pop....