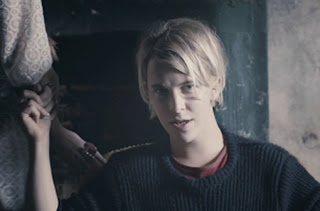 Our sixth One to Watch for 2013 is Tom Odell. He’s the first male soloist on our list. It was only last month that he was introduced on Breaking More Waves.

Odell is a London via Brighton via Chichester singer songwriter that has been touted as a sensitive, good looking, post-Buckley type and that’s probably a good enough box to put him in. His classic style of pop songwriting has had a renaissance recently; witness the recent success of the likes of Lana Del Rey’s Video Games, Adele’s Someone Like You and Jake Bugg’s number 1 album in the UK. It’s this old fashioned school of composition that Odell comes from, plus there’s an honesty and openness to his lyrics that deal with his own (often sad) real life experiences.

It’s not quite clear yet if he’s going to end up being the piano version of Ed Sheeran, a more emotionally charged indie-folk-rock version of Jamie Cullum or find himself worshipped by fans of Coldplay who wish that Chris Martin would just go off and do that intimate intense ivories solo album that you just know he wants to do, but with Lily Allen (now Lily Rose Cooper) backing him with her new label he has some financial weight to take him where he wants to go.

Odell is supporting the aforementioned Jake Bugg and The Mystery Jets this month, but it surely won’t be long before he’s playing shows that leave his own fans breathless. 2013 looks bright for Tom Odell.

Email ThisBlogThis!Share to TwitterShare to FacebookShare to Pinterest
Labels: Ones to Watch 2013, Tom Odell