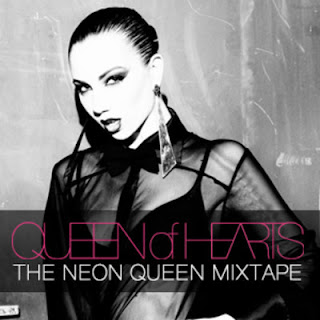 This is a first for Breaking More Waves. We’ve never featured a mixtape on the blog before and arguably we still haven’t. Let’s face facts, whilst this is undeniably a mix it is most certainly not a tape; it’s an on-line stream. At over 45 minutes it's also far too long to fit onto one side of a tape, unless it was a C120 cassette and everybody knows they were rubbish, always jamming and unraveling in your cassette player. However apparently we’re obliged to call it a mixtape and as it comes from one of our favourite electro-pop ladies Queen of Hearts we’d happily call it a mix hedgehog if she asked us to.

So why finally feature a mix tape in what is coming up to our fourth full year of Breaking More Waves?

There’s one simple reason; because it’s amazing. Really amazing. It’s almost as if someone has organised a disco with all of our favourite pop girls (alas excluding Nicola Roberts). Just look at that list below. There's Little Boots, Marina & The Diamonds, Jessie Ware, Icona Pop, Charli XCX and the Queen herself who sneaks in an exclusive track called What Is Love? at the end. Unfortunately it’s not a cover of the Howard Jones classic from the 80’s but we’ll take it anyway. This is the musical version of full on sweaty, sexy rumpy-pumpy for an hour.

As if the Queen hasn’t been good enough to you already with just that mix there’s also a new Ghost Beach remix of Neon (we posted the original here), which is released to the retail world via ATG records on the 14th May.

It can’t get much better than this can it? Time for a dance. Here’s the tracklisting: