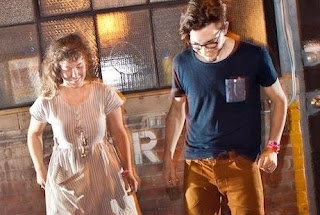 We’re thinking of running an internet TV show for bloggers. It will be called ‘The Cool Factor’. Bloggers will audition by showing how quickly they can copy, paste and embed the latest buzz track onto their blogs. The fastest ten will then take part in the live shows where they’ll have to demonstrate their ability to check their emails, Soundcloud, You Tube, RSS and twitter feeds in search of the buzz at super-human speed with the audience clicking on little red hearts (that look a lot like Hype Machine love hearts) to vote for their favourite blogger.
If the only blog you ever look at is Breaking More Waves then this will mean nothing to you, but if you regularly scour the internet for the best in new music then you’ll probably have come across this phenomenon, seeing certain songs becoming rapidly ubiquitous on blogs over the course of a few hours. Such is the fate of the new Purity Ring track, Obedear. It's found bloggers falling over themselves to get the song up on the web - go search for it on Google or Hype Machine and you'll see what we mean.

Is this form of 'buzz blogging' a good thing or a bad thing ? Certainly most new artists value the exposure a huge number of blogs posting their song can give - artists after all want their music to be heard, otherwise why release it at all?

In the short term this spike wave of listeners on the internet can be invaluable, but in the longer term there needs to be something more from the artist than just a couple of songs that the buzz brigade get excited about.  We've noticed that sometimes it's better for an artist to be just be picked up by one or two blogs and slowly as they release more tracks their online presence and exposure  grows organically. We've seen evidence of this with at least two acts that we've been writing about over the last year, initially we were acting as a blogging one-man fan-machine, but slowly but surely other blogs that we would associate as our blog-buddies, with overlaps in taste, style or attitude are beginning to pick up on them and their exposure and fan base is growing. There's no buzz, just good music.
So this is for those who take a more leisurely and / or single-read approach to music blogs. If you already read lots of them what follows you'll probably already know. We're joining the buzz, because there's also good music here.
With an album due in summer 2012 through 4AD, Megan James and Corin Roddick who are Purity Ring produce this taster from it, full of choppy plink-plonk electronics, pitch shifted female vocals and menacing undertones. That description probably doesn’t sound that different to the much of the weighty volume of electronic music that gets pushed out onto the internet by laptop bedroom producers every day. What sets Purity Ring apart in the melee for blog coverage is a leftfield pop sensibility that also carries a slightly more menacing undertone. There’s a ghost in their machine and we like it.
Born out of the buzz of the internet for sure,  but that they do what they do very well and we would be posting on them if one hundred or zero other bloggers had featured them.
Purity Ring - Obedear
Posted by Breaking More Waves Blog at 08:30

Mad, mad props for this blog post. Front to back. I dropped into Hypem, about to jump into some coding fixes (and being a sideline member of the buzz brigade - exposing new music to friends, mostly:)), and said outloud "38 blogs? In 8 hours?". So glad I picked your post - totally hilarious and spot on.

Sidenote: I do think there's room for an internet TV music blogger show. Not the craziest idea.

None of the tracks on your blog play ?

Anon - apologies - the Soundcloud website is down across the web. Hopefully normal service will be resumed soon.

DShan - Actually The Needle Drop blog does a TV styled review on You Tube, but maybe visual blogging is the way forward ?

I think what Purity Ring have on their side is the fact that their music is very accessible even on the first listen. I wasn't aware that so many blogs knew about them, but it's easy to understand why it didn't take much for them to become converts.