Little Boots - Every Night I Say A Prayer 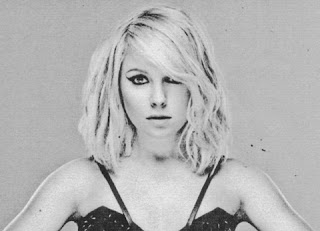 Earlier today we posted about Victoria (a new band) and suggested that this blog isn’t about girls. To a certain extent this was a lie; for there’s no doubt that we post a lot of music with female singers. In fact Hype Machine lists one of our main tags as female vocalists. Female is not a genre of music, but there’s absolutely no doubt that we often find the female tone more enamouring than the male one many a time.

So this is about Victoria, girls and blog posts.

Once upon a time there was this particular girl called Victoria. She was pretty A.M.A.Z.I.N.G at the start. We had one of her songs quite literally stuck on repeat. When we used to feature live reviews on the blog we got very excited about her. But then it seemed to fizzle out, like some relationships do. It wasn’t just a 'it’s not you it’s me' moment, we think a third party had to take some blame as well. The release of New In Town as a ‘big single’ and the accompanying video were seriously misguided decisions by her record label. The not-so-huge commercial success of the song and the subsequent album (which was largely a decent record, just with the odd filler track) led to talk of the ‘curse of the BBC Sound of List’ which young Victoria had topped. By summer 2009 we were panicking that Victoria might go to desperate measures to achieve wider public success – would a lad-mag boobs out cover be on the horizon, or maybe an appearance on some low grade celebrity reality show?

Thankfully Victoria / Vicki / the Vickster didn’t do any of this and instead took herself away, spent some time in her garden (or whatever it is pop stars do when they’re not being pop stars) and continued making music. After all Lady V had already grown thick skin after auditioning for X-Factor and not making it through when she was a teenager. Not being a star of Ga-Ga-esque proportions probably wasn’t going to bother her, or was even on her agenda in the first place.

Then last November came Shake. It was a very good rubbery sounding dance record. She was back in business in our book. Now comes Every Night I Say A Prayer, another disco belter complete with euphoric hooky chorus, seductive 90’s house bassline and hands in the air piano tinkering. It is also very good.

For the second time today, we say hail Victoria. It’s good to have you back Little Boots.

Little Boots - Every Night I Say A Prayer (Free Download)

Don't think anyone in the history of her career has ever called Little Boots "the Vickster"!

You see that's the kind of 'exclusive' you get on Breaking More Waves.

thanks good blog & I enjoyed her track. peace Frankie Francis