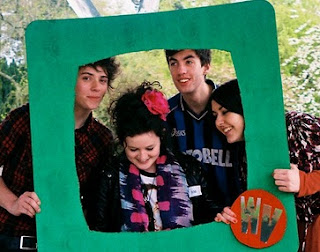 In the mid 90’s a scene born out of fanzine culture, glitter, glamour and d-i-y attitude called Teen-C punked its way across the UK for a few brief but exciting years. The likes of Bis, Dweeb, Disco Pistols, The Period Pains and most notably Kenickie, featuring a young Lauren Laverne, created a wave of short lived enthusiasm for a whole bunch of teenagers with no musical ability but plenty of style / attitude to create their own bands. It even helped give birth to this blog, albeit in a shabbily produced paper fanzine form called Breaking Waves. That’s where the ‘more’ comes from you see.
Whilst this scene, like many other scenes, left no discernible legacy (except for Lauren) you can still hear its influence in the likes of early Los Campesinos!, Fight Like Apes and more recently the band Pris who we’ve featured a number of times on Breaking More Waves.
Here’s a band that are probably far too young to have ever even heard of Teen-C, having only just finished their A-Levels, yet their sound - a blend of gloriously fizzy indie pop -  bears much resemblance to it.
Wonder Villains are Eimear Coyle, Cheylene Murphy, Ryan McGroarty and Kieran Coyle from Derry in Northern Ireland.  Having already released the likes of Zola - a toybox song of sugary catchiness that references the Italian football legend - the band is readying its new single Ferrari for release on Feb 19th. It’s a brilliant mess of girl gang shouting, forthright vocals and hooky synth and guitar lines that irrespective of your age will probably have you smiling and dancing. Some times girls (and boys) just want to have fun. Now where’s that glitter?
Wonder Villains - Ferrari

I can't tell you how happy I am to see that you picking up on The Wonder Villains. I've been a fan of the band for two years now, and I'm glad to see that they're finally beginning to make some rather big waves (they were one of my tips for the year). My favourite of theirs remains 'SpaceJam', although the new version of Ferrari is rather awesome as well. Our radio station had them in for a live session yesterday, so I'm looking forward to seeing that broadcast.