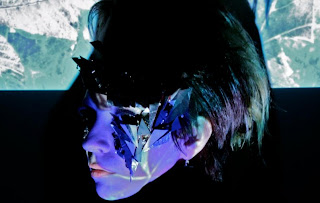 The name Sylver Tongue sounds like a character out of a fantasy or sci-fi novel but this lady is very much a reality, having launched herself as an artist a couple of months ago. Her debut track Hook You Up possesses sad spacey retro synths straight out of an 80’s movie soundtrack. It reminds us of Take My Breath Away by Berlin or Nothing Compares 2U by Sinead O’Connor. A haunting and desperate keyboard ballad for the modern genration, Hook You Up lands to inhabit planet pop with a bruised simmering vibe. The Nothing Compares 2U comparisons don’t end there either, because Prince wrote that song and Sylver Tongue has credited the Parade era purple genius as being one of her main obsessions whilst penning the it.
There’s no other material or much information out there about Sylver Tongue at the moment, but what we do know is that she’s been working with James Rutledge (Fever Ray, Everything Everything), sports an awesome mohawk haircut, triangular shaped earrings and GaGa-esque face art. If you’ve ever spent a bit of time on Breaking More Waves you’ll know we’re suckers for girls with electronics that do dressing up and fashion and so our interest has certainly been roused. Let’s see where this goes next, but early inquisitives can catch Sylver Tongue at Madame Jo Jo’s in London (Feb21) Unit in Southampton (Mar 17) and the Lexington also in London (Mar 20).
Silver Tongue - Hook You Up

Silver Tongue - Hook You Up (Video)