The Milk - Broke Up The Family 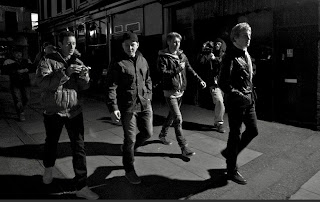 Trust us there really is more to Essex that TOWIE. For a start there’s The Milk.

Employing a heavy stab of 60’s r ‘n’ b and soul influence that the group are known for and taking a dash of their fearsome live sound to the studio, the band return with a new single Broke Up The Family, released on April 2. If the song title seems familiar it’s because we featured the video in December, although at the time we didn’t realise it was going to be a future single. We’ve included it again on this post so you can get a full feel for it.

The Milk have become Breaking More Waves blog regulars from back in 2010 when we first featured them as a new wave and then named them as ones to watch in 2011 (a little early in hindsight). Now we’re pleased to announce that the four piece have been recording and mixing their debut album with DJ and remixer Brad Baloo (The Nextmen). The as yet untitled body of work will see a release later this year.

In the meantime here’s one of two remixes that are floating round the internet at the moment. The Hostage vs Rack N Ruin version you can hear here, but we’re streaming the Kenny Ken’s version which manages to combine a reggae groove, jungle beats, rave airhorns and piano swipes. That's pretty mental.

The Milk are without doubt one of the best new live bands we’ve seen out on the road in the last couple of years and if you’re in the UK, you should be able to check them out in a venue near you as they set off on a huge tour through March and April (dates are here). We will be and consider it a crime for you not to. Beg, borrow or sell your boyfriend / girlfriend to see this band. It's a necessity.

The Milk - Broke Up The Family (Kenny Ken's #junglememories Remix)


The Milk - Broke Up The Family (Video)