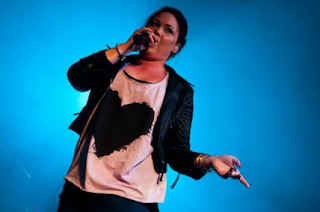 ‘The new urban Adele’ is the tag line that seems to be rapidly attaching itself to Pepper. It’s not a bad tag to have – certainly better than ‘the new disco Cheeky Girls’ or ‘the new indie Rebecca Black’ – but one that we’ve seen appearing a number of times on our twitter feed the last few days as people get to know her name by way of a support slot on the current Rizzle Kicks tour. With no disrespect to Pepper but such is the all consuming ubiquitous presence of Brit award champion Adele that any female vocalist with a gutsy voice who isn't  writhing around half naked in her videos is at risk of getting the Adele comparison.
Of course you already know Pepper's name don’t you? Because you spend every waking moment of your life glued to the internet just waiting for that next post from Breaking More Waves. And if there was an exam about this blog and the test paper asked you when we first mentioned Pepper you would correctly answer that it was on November 21st and that we then subsequently featured her on the 14th January and the 17th January. Good, well done, get a gold star and go to the top of the class.
If not, we’re disappointed in you, but there’s still hope – teacher is putting on some extra after school classes to get you up to speed. Today we’re featuring two new stripped down live Pepper tracks  – Happy Girl and Running Rings (don't expect the final versions of the songs to necessarily sound anything like these, they're just tasters), plus for those who failed the exam this time, catch up on the fully loaded and previously featured collision of jungle and strings mayhem that was Pepper’s arrival track Wish It Away.

Pepper - Wish It Away

Email ThisBlogThis!Share to TwitterShare to FacebookShare to Pinterest
Labels: Pepper

I can kinda see the comparison to Adele, but I agree with you, that these days a gutsy voice with a slight jazz inflection is compared automatically with Adele. I could hear a less poppy, simplified Jessie J, or similar to another indie brit artist, Rox.