The Staves - The Motherlode 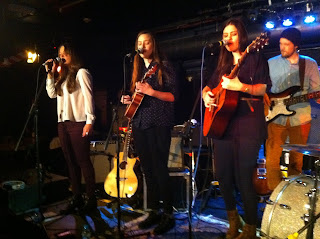 There’s been a lot of commentary on blogs, websites and in the traditional rock press over the last few months about the so called death of indie rock. Certainly the format of ‘four skinny lads in jeans with guitars against the world’ has stalled commercially in terms of record sales and arguably creatively as well.
Depending on your perspective the lack of indie rock within the UK singles charts is either the signal for the hammering of the nails in the coffin lid, a momentary pause whilst the wheels of fashion turn, or it’s still doing the business just in different ways. It certainly gives us all something to write about. Music journo types, like any other, love a sensationalist headline and if they can get ‘Indie R.I.P’ across their pages then why not? It might generate some hits / readers.
We’d like to propose a different theory though. It is one of tradition. Guitar based indie rock music has been around for a while now. In fact it’s reached middle age. The possibility of the excitement caused by true originality has faded as new ideas become foggier and harder to find for new indie bands. Most of them have been used before; everything references something else.
Indie will now just slowly evolve in the same way as an older form of traditional music - folk - has. Maybe indie rock will even become the new folk music? As long as people continue to practice the traditions, it won’t die. It may not innovate anymore, it may not blaze up the pop charts, but it will still be there, for those who want to play, perform and participate in it.
That ladies and gentlemen of the Breaking More Waves blog readership is our theory. Which brings us neatly to The Staves; a band rooted in the tradition of acoustic folk music. They may not be 100% original or innovative in what they do, but these three sisters from Watford are blessed with such wonderful harmonies and hush-the-room melodies that they fully justify why tradition is hugely important in music. When it envelops the emotions with such warmth it would be wrong to have it any other way.
Fresh from supporting Michael Kiwanuka on his UK tour, The Staves are due to release their new EP (their second) at the start of April and follow it up with their own headline tour (see here for dates and grab 2 free downloads whilst you're at it). Listen to the title track from the EP Motherlode below, be washed along with their angelic voices and understand why we named them as one of our Ones To Watch 2012 last December.
The Staves - The Motherlode
Posted by Breaking More Waves Blog at 08:30

then again Indie was never supposed to be mainstream. It was DIY, it was an alternative to chart fodder. And like anything good it was absorbed into the mainstream and ruined by corporate money and greed. It's a defunct title and as a "genre" made little sense. But again it was never really supposed to be a genre,per se, it was a spirit. Check early Creation Records releases, you'd have chiming guitar bands such as the House of Love alongside the experimental electronica of Momus,neo-psychedelic garage pop fused with acoustic strumming from Biff Bang Pow etc etc. It was quite an eclectic mix in its purest form.

Nowadays Adele is atop the indie charts and that says it all..;)

Maybe for this post I should delete indie and just refer to guitar music, but then someone would say 'but Coldplay play guitar music and they're still having hits'

So I added in the word indie - but as you say indie was (in the past) as much a spirit as a sound. Maybe today's indie is the hoards of laptop based producers making music in their bedrooms and releasing it to the internet for free ?

Or maybe the term is obsolete and needs to be buried. Certainly when you see the likes of Scouting for Girls being referenced as Indie the term has become not just dead but utterly devalued.

This for me, is folk, hands down. It sits in the gap between the likes of Goldenhorse and Joanna Newsome.

I'd rather see some video though, not sure how the mellow nature of these tracks translates live, especially if they're competing with the indy-rock bands...