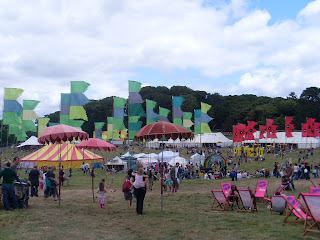 Some of the biggest dates in the Breaking More Waves diary are summer music festivals.This year we’ll be providing coverage of a number of them in the of UK, namely The Great Escape, Glastonbury, Camp Bestival, Lounge On The Farm, Summer Sundae, Bestival, End Of The Road, Southsea Fest and Nightmare Before Christmas.

Unlike previous years we won’t be providing long rambling reviews of every band we saw – we’ll leave that to others with superior journalistic skills. Instead our reports will be very much from a punters view with an eye on the whole festival experience. So that means whilst we’ll be bringing you the musical highs we’ll also be describing in words and pictures the gory details of the food, the camping, the atmosphere, the weather, the people and of course the toilets. In fact we promise to give the most detailed coverage of UK festival toilets anywhere, yes that includes photographic evidence – it may not be for the faint hearted.

So as summer is just on the horizon, get ready for Breaking More Waves at the festivals. There may be mud, there may be music, there will almost definitely be mayhem. Where technology, the internet and mobile phones allow us we'll be tweeting from all of these events, so if you're interested why not follow us here.

We start later today with the first part of our 3 part preview of Brighton’s The Great Escape, where we’ll be giving tips on how to get the most out of the multi-venue extravaganza and recommending 15 of the best new acts to see day by day, 5 from each day.

For now here’s a couple of tracks from headliners of two of the festivals we’ll be covering, from Lounge On The Farm – The Streets and from the-not-so-summery Nightmare Before Christmas – Battles.

The Streets - OMG (The Knocks Remix)

i'll really be keeping an eye! you've got it all covered for sure. great posts. :)