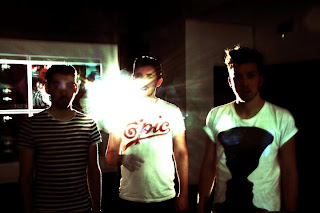 If you’re the sort that likes bands, but also like to get your savvy synth groove on, embracing the likes of Delphic, Fenech-Soler, Chew Lips and Friends Electric then the crisp computerised tunes of Lighthouses could be the next jams to funk you giddily into party heaven.

Lighthouses are a go-for-the-burn electronic pop trio that create a sound that suggests that some mad vibed up scientists have gone clubbing, got back to the lab and decided to crack the formula for getting everyone up moving and shaking – and we’re not talking Dancing Queen by Abba or I’m In The Mood For Dancing by The Nolans here. Lighthouses songs are full of shoot for the stars sexy disco bleeps that just when you think you know where you’re heading take a little twist and head even higher, but all within the context of a pop song.

Having remixed the aforementioned Chew Lips and Fenech-Soler as well as the likes of Yeasayer and Miike Snow, Lighthouses have got out there with support slots including David E Sugar, Mini Viva, Get Shakes, Midi Midis, Ignug and LA Shark. They’ve now picked up some coverage through the very important BBC Introducing and have also had their track played on NME Radio. Next they get the Breaking More Waves treatment and will follow this up with some gigs across the UK in the next few months including shows in Southampton, Bristol, Doncaster, Nottingham, London and a slot at the newly created Good Weekend Festival in Hampshire. Get ready to wriggle uncontrollably to their songs that stream below and when you hear the Telegram from the Queen remix of Control be prepared to change your knickers – as you may just lose yourself physically.

Control (Telegram from the Queen Remix) by Lighthouses
Posted by Breaking More Waves Blog at 08:30

Email ThisBlogThis!Share to TwitterShare to FacebookShare to Pinterest
Labels: Lighthouses