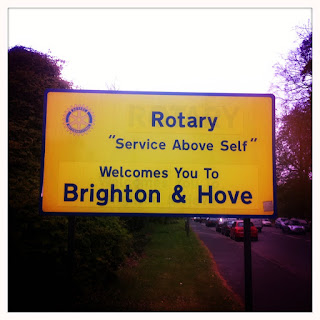 For our next three posts our attention turns to what in many ways is a prelude to the main UK outdoor summer festivals – Brighton’s Great Escape. Like a smaller European version of SXSW, The Great Escape is a 3 day multi-venue, multi-gig, urban festival which has a particular focus of new music. Although there are a number of other similar events in the UK, Great Escape is certainly the biggest.

In theory the idea of multi-venue festivals sounds brilliant. Stroll from club to pub displaying your wristband proudly, catching bands as you please, with no worries about the weather, the toilets or getting a bad nights sleep because some wide-eyed douche-bag in the tent next to you wants to stay up drinking all night and shouting his head off. Urban events are very much festivals of convenience. You don’t need to pack your wellies or lug an arm draining 24 pack of lager across miles of fields.

However the reality can be somewhat different – venue capacities can mean that popular acts can become easily over-subscribed leading to a significant amount of your time being spent standing in queues. With the festival being in an urban setting the sense of freedom and inclusivity can be lost, making the event seem just like a series of gigs and parties rather than something magical where the normal rules of society don’t apply. And if you’re not able to make it home every evening and have checked in to a cheap hotel or hostel you still run the risk of being kept up all night by drunk revellers running up and down the corridors and slamming doors.

However, at all the Great Escapes Breaking More Waves has attended, we’ve never missed a band that we wanted to see and never been thwarted by the long queue. As a result we’ve seen intimate shows by what are now some of the biggest selling UK acts both home and abroad. It seems almost bizarre now that we caught Adele singing in the so-small-you-couldn’t-swing-a cat bohemian environs of the Red Roaster Café. Likewise we watched Mumford & Sons occupy a third on the bill spot in a performing arts theatre alongside Laura Marling, Noah & The Whale and a certain Jay Jay Pistolet, now better known as the lead singer of The Vaccines.

So how do you ensure you get to see the artists you really want to see? Here’s our simple tip-list:

1. It pays to be organised. Work out your timetable (with a reserve plan) before the event – it’s all listed on the website (here) or in full colour programme preview PDF (here). Check the venue capacities if you don’t know them (again listed on the site) – don’t expect to turn up to see a ‘buzz’ band 5 minutes before they are due to play in a 100 capacity venue. In fact with the Great Escape don’t expect to be able to wander from venue to venue as you please. Tickets are selling fast (Saturday day tickets have already sold out) so gigs will be busy. Be prepared to get to venues early for bands you particularly want to catch.

2. Go to the daytime gigs as well as the evening ones. Our experience has shown that these gigs are a little less busy, particularly the early lunchtime slots and some real gems can be found in the day.

3. Sign up to the text messaging service by texing ESCAPE to 87085 and they’ll send you all of the details of schedule changes, secret shows, hidden parties, venue capacities and much more as they happen on site. There’s an initial sign up charge of £1.50 plus your standard network charge. After that you will not be charged to receive notifications from Great Escape.

4. Use Twitter. The micro-blogging site can be invaluable as a supplement to the text service, plus you can find out lots of other information from punters, bloggers, journalists and bands that are playing. Of course, as a start we recommend that you follow us (here). We’ll be tweeting regularly from the event.

5. Don’t forget the Alternative Escape which gives you even more choice of gigs and parties to attend. All shows are completely free with your festival wristband although these gigs are also open to the general public.

So with plenty of time to still plan your timetable, let Breaking More Waves assist you with a few recommendations of artists to see, starting in this post with Thursdays line up. We’ve listed the currently confirmed times and venues for all of the bands playing, but please check the final programme as they may be subject to change. Practicalities mean that we won’t be at all these gigs ourselves but all these acts come with our full approval. Friday and Saturday's line up recommendations follow soon in the next two posts.

First featured on Breaking More Waves back in October 2010, the self-named night pop of Alpines has been a regular feature ever since. The London male-female duo have had a huge number of comparisons thrown their way with names such as Bat For Lashes, Fever Ray, Portishead, The XX, Massive Attack and Zola Jesus being mentioned. Their music has an ethereal, electric and slightly menacing trip-hop /pop aesthetic to it and with a major label deal through Polydor in the bag one question that the Great Escape may help answer is can the bands very studio based sound be pulled-off live ? There's at least two chances to check them out on Thursday.

Where better to hear the surf-pop-harmonies of Oxford five piece Fixers than a pier on the sea? Another band that are rapidly becoming Breaking More Waves regulars, the bands new EP Here Comes 2001, So Let’s Head For The Sun is four tracks of brilliantly playful and experimental harmony laden pop that owes significant debt to Brian Wilson, Animal Collective and spaced-out spot-on genius.

On the same bill as Fixers, New York boy and girl duo Brian Oblivion and Madeline Follin have been the talk of the blogosphere for some time (they first appeared on Breaking More Waves in March 2010) Like Fixers, Cults offer nostalgic reference points for a modern day indie pop audience, covering bases from the twee twinklings of Go Outside to this slightly brasher offering – Abducted.

Hailing from Melbourne, Australia, Miami Horror are not hugely known in the UK, although elsewhere in the world 2010 album Illumination has gained significant recognition with its blend of hands in the air, cheddar smothered, sugary disco references and dance-floor bangers. If you like the Bee-Gees, Abba and Michael Jackson but also like fist pumping electro (with a hint of New Order guitar) then for a late night Thursday boogie you could possibly do no better than shaking your arse off at Coalition.

OK, strictly speaking this show is on Friday being in the early hours of the morning and the band are playing later in the day after (hopefully) some sleep at Above Audio at 14.45, but really this is part of Thursdays proceedings. If the idea of dancing round your handbag club-bound stylee to Miami Horror really isn’t your thing, why not try this show put on by fellow music blog My Band’s Better Than Your Band. We’re convinced you can’t go wrong with the off-kilter indie of Dog Is Dead. We’ve previously compared the Nottingham based group to Mystery Jets, Local Natives and slapped on a reference to Beach Boys harmonies as well. The first band in ages to make the saxophone cool again, Dog Is Dead are gloriously uplifting and full of big pop ideas. Fresh (or not so fresh as the case me be) from some support slots with Brother, Dog Is Dead bring more invention and thrills than anything the Slough based abomination of a band could ever provide.

Hope you enjoy and don't get stuck in too many queues !

Just to update anyone reading this, Alpines have pulled both their gigs on the Thursday (just like they pulled out of my Joe Bloggers gig, sob sob) so it's worth checking their Facebook to stay upto date - http://www.facebook.com/alpinesmusic

Thanks Saam - they don't seem to have much luck with gigs - their support slots on the Fenech Soler tour got pulled because the lead singer of Fenech became ill as well.