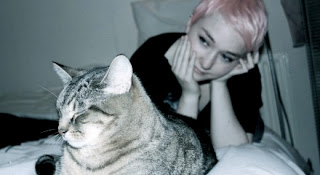 We’re not quite sure what a ‘re-imagining’ is, but that’s what Breaking More Waves favourites Labyrinth Ear are calling this new version of Arthur Russell’s This Is How We Walk On The Moon which they’ve recently unleashed to the internet. Re-imagining certainly sounds a little more artful than remix and a little more sophisticated than a rework don’t you think?

Russell was a musician who died at the young age of 40 and was relatively unknown in his lifetime, but a series of re-issues, compilations and a biopic have raised his profile since. The song was originally featured on his 1994 album Another Thought and was used in a UK TV advert for T Mobile, which is probably where you are most likely to have heard it. Labyrinth Ear told us that it’s one of their favourite tracks.

Having featured pretty much every track from their debut Oak EP on the blog it’s nice to have some new output from the duo and hopefully we’ll see some original material floating by fairly soon from Tom and Emily (pictured above – or at least Emily is, but then that could be a tom couldn’t it?) Here’s their re-imagination..

Walk on the Moon (Arthur Russell) by Labyrinth Ear