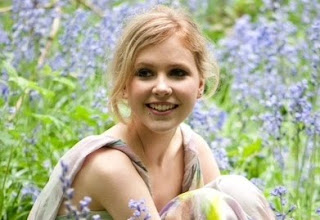 Here is something that both visually and musically can only be described as pretty. Misty Miller has recorded a version of a song by Nick Lucas - Tiptoe Through The Tulips - which hit the top of the charts in May 1929. Yes you read that correctly; 1929. Did you know the charts even existed then?

She’s not the first to cover the song though as she follows in the footsteps of California rock group The Humane Society as well as Tiny Tim who took the track back into the charts in the late 60’s.

The concept behind the song is to draw people's attention to the huge importance of protecting the UK's ancient woodlands. The song was released through I Tunes this week and all proceeds from the song will be given to the Woodland Trust.

Fashion fans may be interested to know that the beautiful dress that Misty wears in the video, which makes her look like part of the forest itself was designed by Matthew Williamson. But don’t go running down to Top Shop to grab one because it is the only one in existence. The film was shot in Heartwood Forest, St Albans and the photo above was shot by Phil Lockwood.

Besides the single, in other Misty Miller news her album is now streaming in full on Soundcloud (here) and we’re presenting one of our favourite tracks from the album – Wild Thing – for you to listen to below. Did we mention the word pretty? That’s exactly what it is. Pretty uke-pop-folkin' brilliant.

The dress is available at the Matthew Williamson website http://www.matthewwilliamson.com/shop/uk/spring-2011/eveningdresses/sun-bleach-print-parachute-column-dress.html
but not at Topshop!