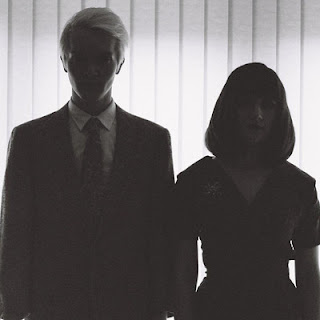 The word curses immediately evokes sinister images of evil doom and foul-mouthed despair, but the X in the middle of this Brighton based male-female electronic duo’s name adds the symbolism of a kiss. Maybe it signifies something more affectionate and possibly sexual? If it does then Curxes have chosen their name perfectly. For their music has a touch of synthy nu-goth heaviness together with a lighter seductive embrace. Curxes sound is a mixture of the darkness of post-Vince Clarke Depeche Mode, the industrial ice-cool of Propaganda, vocals reminiscent of a smoother Siouxsie Sioux all carpeted with fluidly uplifting pulses. Their blend of pop-noir takes you to the more intriguing and exciting corners of the disco where mysterious illicit couples writhe together. It’s a place you really should visit.

Of course the name could be nothing more than a simple attempt to ensure that Curxes are easy to google (they are), unlike the band they have risen phoenix-like from. In a previous incarnation Curxes, who are Roberta and Macaulay respectively, were in a four piece called Holdfast who supported the likes of White Lies, Chew Lips, These New Puritans and The Joy Formidable before disbanding.

For now there are just two songs. One of these - The Constructor - is streaming below. The other – Spires - can be found on the bands Soundcloud. Curxes have yet to play live but as their website says “Coming soon.” We will be keeping a careful eye out.

The Constructor by CURXES
Posted by Breaking More Waves Blog at 16:45