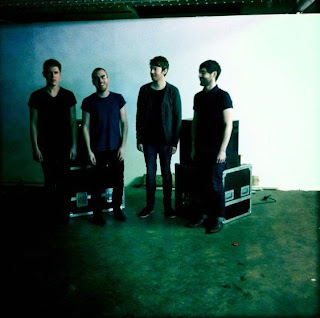 Last Sunday most music fans in the UK were debating Lady Gaga’s performance at Radio 1’s Big Weekend in Carlisle (our view – Gaga may have successfully caught out her audience with another shock tactic, this time the music being the talking point rather than her normally outrageous costumes, but her jazz opus felt so bland and middle of the road that we actually longed for the moment when she rolled out the synths and the beats, which unfortunately she only did sparingly).

However, whilst the chatter continued Breaking More Waves was celebrating musical victories of a smaller kind. Over in the BBC Introducing Tent the line-up included a number of new bands that we’ve positively supported over the last year or so. Mopp, Let’s Buy Happiness, Polarsets and Rizzle Kicks have all featured more than once on these pages, some of them as far back as February 2010 and all got their chance to play courtesy of Auntie Beeb. Another act that appeared – Friends Electric - we first wrote about last May and following their performance (some of which you can see here) they have now released a new video for their song Fireworks. We’ll exclude any puns about the song being explosive or rocketing into your mind and instead just say watch it. The track will be released on June 20 and is another piece of their neat fitting electro-pop jigsaw that sits sharply alongside the likes of Delphic and Fenech-Soler.