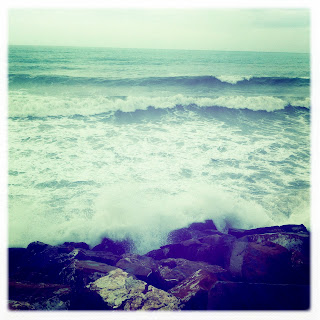 It’s been a good week for music. Rumours spread that the KLF are back together performing ambient folk under the name FLK (we do love a KLF rumour, no matter what it is - have a look here and here) plus more information about our favourite member of Girls Aloud - Nicola Roberts – LP began to emerge (here). Now we’re going to make it even better with our nearly new feature called The Saturday Surf, where we round up a number of tracks that didn’t quite make it onto Breaking More Waves with their own individual post, but all get our approval.

Whilst we’re waiting for Nicola’s arrival, new Spice Girls colliding with Bananarama girl-pop duo Oh My! shoved out a remix of their debut track Run This Town which we first featured back in March. With jaggy synths and we’ve got attitude hooks this is worth clicking on the arrow to download for free. Oh My! have been following classic pop traditions and rather than slogging their way round toilet venues playing live shows to twenty people for credibility, they are out there doing PA’s at schools – giving the kids what they want, what they really really want.

Brighton’s Rizzle Kicks have already been given the Breaking More Waves treatment a number of times and here they are again with their new track Prophet (Better Watch It). It continues their cheeky, innovative and playful blend of rap / pop with soulful vocals that’s not a million miles away from the wonderful De La Soul. Rizzle Kicks will be one of the acts playing this years Great Escape Festival launch party in Brighton next week before they head up north to feature on the BBC Introducing Stage at Radio 1’s Big Weekend in Carlisle.

Next up is a new band that a small number of blogs have picked up on. Theme Park is nothing to do with Alton Towers, Disney World or Legoland and everything to do with making music that sounds very much like Talking Heads with a slightly tropical twist. The band consists of two brothers and three friends from London. Milk is their suitably groovy introduction.

For those who like soft feminine vocals and acoustic tenderness you could do no wrong by wrapping your ears around the songs of Alice Jemima. Having introduced you to her with two tracks Ain’t It Funny and Won’t Take You For Granted, here’s another tune – The Woman. With its gorgeously calm melody and understated charm it’s a little diamond of a song.

Finally ex Ox.Eagle.Lion.Man and ex Les Incompetents dude Fred Macpherson returns with a new project – Spector. Their debut single Never Fade Away is a crooning pop extravaganza, immaculately produced with just a drop of nostalgia – it’s the kind of classic tune that your mum would like – and if she does then your mum has damn fine taste. Probably the finest work to date from a man whose twitter strapline states “I like music. Maybe more than music likes me.”