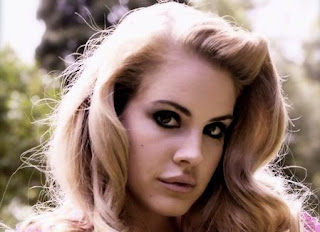 The music of Lana Del Rey is rather sumptuous. It’s perfectly styled with a strong cinematic influence – like something out of a French art-house film or a Tarantino movie - but with massive gateaux slice of creamy pop shoved in as well. Listen to her songs and you’ll probably be struck with the imagery of cocktail parties, cool looking men dancing with even cooler looking girls, jazz clubs, gangsters, fashion shoots for high-class magazines, drug deals and sad lonely Hollywood film stars. Oh, and Smash Hits magazine.

Rather like The Cardigans circa the Life album or Vanessa Paradis on her self-titled album from 1992 Lana Del Rey has conceptualised a very specific sound, from a very specific time; namely the sixties. However, unlike those two artists the production on Lana Del Rey’s work is more polished and ‘now’ - the nostalgia comes from the reference points. On repeated listens it’s possible to envisage Paloma Faith having a crack at these songs, although we doubt if she’d be able to deliver the vocals with such aplomb – all sultry and smoky one moment, all girlish and cute the next. In fact the girlish and cute side brings to mind much more chart bound pop acts such as Katy Perry and even Britney to a certain extent. It's an odd mix, but it works.

Take a look at the video for Kinda Outta Luck and its guaranteed that after the thirty seconds of nostalgic scene setting you’ll think of Julee Cruise singing Falling or Nancy Sinatra performing Bang Bang as she opens her mouth. “I was born bad but then I met you, you made me nice for a while, but my dark side’s true,” she husks over slow twangy guitars. Then suddenly the song bursts to life with snappy drumbeats and Lana exclaims with glee that “My daddy’s in the trunk of his brand new truck, I really want him back but I’m kinda out of luck, ” and we hear snapshots of country, pop and the aforementioned sixties. Lana may look the all-American doe eyed beauty, but there’s something sinister going on here as well - as the video says "loving her is like shaking hands with the devil."

Also streaming below is another song – Video Games – which despite its title is not some sort of neon-electro track that pays homage to Tron and Super Mario, but a sad sounding ballad built out of Florence and the Machine like harp, strings, piano and military drums full of references to bad girls (again), alcohol and Belinda Carlisle in the words “heaven is a place on earth.”

These are impressive beginnings for the 24 year old from New York that now spends most of her time in London and whose real name is Lizzy Grant. We’re not quite sure where her songs will fit in today’s pop landscape, but we’re looking forward to hearing more.

*Edit the original soundcloud embed for Video Games has now been removed and replaced with another (identical) version of the song which you can find by clicking this link. Lana Del Rey - Video Games

If you're looking for more of her music, I've found that you can download her old self-titled album (that she's tried to withdraw from the public) from her old label. http://is.gd/OOQHT8