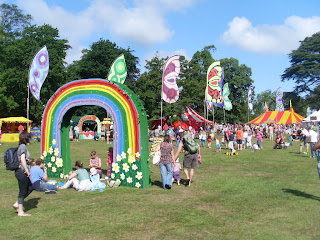 Founded in 2008 by Bestival head-honcho, Radio 1 DJ and all round quality music connoisseur Rob da Bank, Camp Bestival is the smaller sister festival to its big bro Bestival. Whilst Bestival has always attracted a wide range of ages and types, as it has grown from just a few thousand attendees to over 40,000 it has become too big and too loud for many who used too attend - particularly families. Camp Bestival is the obvious and logical next step for those groups as well as those who have found other non-family friendly festivals too daunting.
Camp Bestival still contains the eclectic mashed-up village fete / party vibe of the early Bestival festivals back in ‘04’ - 06. However it’s smaller capacity site set in the grounds of Lulworth Castle, Dorset, complete with sea views and a strong visual styling gives it a strong boutique feel. Whilst most festivals set aside a small amount of space for ‘family camping’ at Camp Bestival this small space is labelled ‘non-family camping’ with the rest of the site being occupied by families - giving the event a very safe and relaxed atmosphere.
One of the most magical areas of Camp Bestival is the huge kids garden, right next to the castle. Here adults and little ones combine in a utopian society which you simply don’t find in the real world. Adults can grab a beer in the Wonderland Inn, food from Hugh Fearnley-Whittingstall’s River Cottage Cafe, or cakes courtesy of the Women’s Institute Tea Tent, whilst they watch acts perform on the bandstand. Meanwhile kids can have the time of their lives watching the Insect Circus, attending the mini pamper lounge, participating in the kids dressing up and catwalk, crazy bikes, puppet shows, book tent and much much more. Elsewhere on site there’s jousting, the house of fairytales, the Bestival institution that is the Bollywood Bar, Pink Flamingo cocktail bar, Literary tent (where Breaking More Waves will be making an early morning Saturday appearance on stage as part of a show entitled “ A Chapter In My Life”), a mesmerising firework display (a clip of last years can be found here) and plenty of live music.
Unlike many other family orientated festivals that seem to assume that your interest in music stops the day you become a parent, Camp Bestival provides an eclectic mix of bands and DJ’s from nostalgic singalongs to fresh exciting acts. Five of Breaking More Waves Ones to Watch 2010 are appearing at Camp Bestival (Ellie Goulding, Hurts, Beth Jeans Houghton, Stornoway and Unicorn Kid) alongside old favourites such as Billy Bragg, Madness, The Fall and The Human League. More recent chart toppers Calvin Harris, Example, Friendly Fires and Chipmunk bring a youthful vibrancy to proceedings and DJ action comes from Annie Mac, Mr Scruff, DJ Derek plus of course Rob Da Bank himself, amongst others. Below are 5 of the newer acts that Breaking More Waves will hope to catch, line up clashes and too much cider permitting !
Hi-de-hi campers -check back here next week after it's all over for a full Camp Bestival 2010 review, plus if you're on Twitter follow us as we attempt to Tweet our way around the festival (internet access permitting).
1. Stornoway
First featured on Breaking More Waves in May 2009 here.
The finest acoustic pop band from Oxford received a rave review from us for their debut album Beachcomber's Windowsill here. They’re a band that the phrase charm your socks off was invented for. Beautiful songs, beautiful melodies - simple.
2. Visions Of Trees
First featured on Breaking More Waves in June 2010 here.
A mix of Cocteau Twins vocals, tribal-electronica and ambient gurgles, this exciting new London duo create atmospheric washes of ethereal danceable rhythmic wonderment.
3. Unicorn Kid
First featured on Breaking More Waves in August 2009 here.
Delivering chiptune and big beats, Unicorn Kid has already knocked out one of our singles of the year with the mighty Dream Catcher. Expect a high energy, sweaty, fist-pumping, ravetastic show from the Scottish wonder kid. Oh, and possibly the odd lion hat.
4. Hurts
First featured on Breaking More Waves in December 2009 here.
Hurts blend of high-pop electronic melancholy has a glossy pretentious feel to it that worked superbly in a dark London old fashioned music hall (here). Quite how they will fare at a summer festival is another matter, but it will be intriguing to find out.

5. Lucky Elephant
First featured on Breaking More Waves in March 2009 here.
Sunday Best recording artists Lucky Elephant produced one of our albums of 2009 and were due to play Camp Bestival last year, but their bandstand set got rained off. We will be praying for better weather this year from this engaging group who provide sensual vintage summertime vibes.
Posted by Breaking More Waves Blog at 00:01